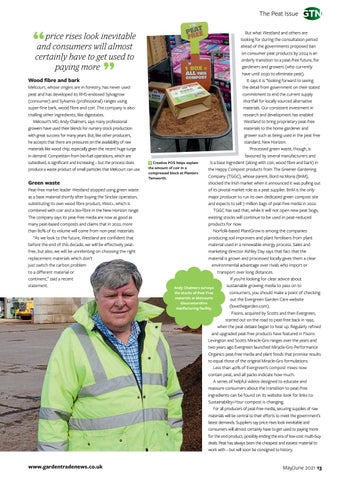 price rises look inevitable and consumers will almost certainly have to get used to paying more Wood ﬁbre and bark Melcourt, whose origins are in forestry, has never used peat and has developed its RHS-endosed Sylvagrow (consumer) and Sylvamix (professional) ranges using super-ﬁne bark, wood ﬁbre and coir. The company is also trialling other ingredients, like digestates. Melcourt’s MD, Andy Chalmers, says many professional growers have used their blends for nursery stock production with great success for many years. But, like other producers, he accepts that there are pressures on the availability of raw materials like wood chip, especially given the recent huge surge in demand. Competition from bio-fuel operations, which are subsidised, is signiﬁcant and increasing – but the process does produce a waste product of small particles that Melcourt can use.

Green waste Peat-free market leader Westland stopped using green waste as a base material shortly after buying the Sinclair operation, substituting its own wood ﬁbre product, West+, which is combined with coir and a bio-ﬁbre in the New Horizon range. The company says its peat-free media are now as good as many peat-based composts and claims that in 2022, more than 80% of its volume will come from non-peat materials. “As we look to the future, Westland are conﬁdent that before the end of this decade, we will be eﬀectively peatfree, but also, we will be unrelenting on choosing the right replacement materials which don’t just switch the carbon problem to a diﬀerent material or continent,” said a recent statement.

But what Westland and others are looking for during the consultation period ahead of the governments proposed ban on consumer peat products by 2024 is an orderly transition to a peat-free future, for gardeners and growers (who currently have until 2030 to eliminate peat). It says it is “looking forward to seeing the detail from government on their stated commitment to end the current supply shortfall for locally sourced alternative materials. Our consistent investment in research and development has enabled Westland to bring proprietary peat-free materials to the home gardener and grower such as being used in the peat free standard, New Horizon. Processed green waste, though, is favoured by several manufacturers and Creative POS helps explain is a base ingredient (along with coir, wood ﬁbre and bark) in the amount of coir in a the Happy Compost products from The Greener Gardening compressed block at Planters Company (TGGC), whose parent, Bord na Mona (BnM), Tamworth. shocked the Irish market when it announced it was pulling out of its pivotal market role as a peat supplier. BnM is the only major producer to run its own dedicated green compost site and expects to sell 7 million bags of peat-free media in 2022. TGGC has said that, while it will not open new peat bogs, existing stocks will continue to be used in peat-reduced products for now. Norfolk-based PlantGrow is among the companies producing soil improvers and plant fertilisers from plant material used in a renewable energy process. Sales and marketing director Ashley Day says that fact that the material is grown and processed locally gives them a clear environmental advantage over rivals who import or transport over long distances. If you’re looking for clear advice about sustainable growing media to pass on to Andy Chalmers surveys consumers, you should make a point of checking the stocks of Peat Free materials at Melcourts out the Evergreen Garden Care website Gloucestershire (lovethegarden.com). manfacturing facility. Fisons, acquired by Scotts and then Evergreen, started out on the road to peat-free back in 1992, when the peat debate began to heat up. Regularly reﬁned and upgraded peat-free products have featured in Fisons Levington and Scotts Miracle-Gro ranges over the years and two years ago Evergreen launched Miracle-Gro Performance Organics peat-free media and plant foods that promise results to equal those of the original Miracle-Gro formulations. Less than 40% of Evergreen’s compost mixes now contain peat, and all packs indicate how much. A series of helpful videos designed to educate and reassure consumers about the transition to peat-free ingredients can be found on its website: look for links to: Sustainability&gt;Your compost is changing. For all producers of peat-free media, securing supplies of raw materials will be central to their eﬀorts to meet the government’s latest demands. Suppliers say price rises look inevitable and consumers will almost certainly have to get used to paying more for the end product, possibly ending the era of low-cost multi-buy deals. Peat has always been the cheapest and easiest material to work with – but will soon be consigned to history.