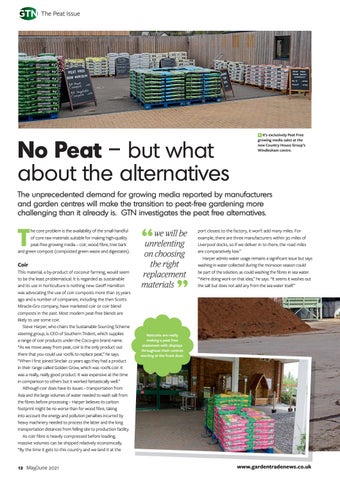 No Peat – but what about the alternatives

The unprecedented demand for growing media reported by manufacturers and garden centres will make the transition to peat-free gardening more challenging than it already is. GTN investigates the peat free alternatives.

Coir This material, a by-product of coconut farming, would seem to be the least problematical. It is regarded as sustainable and its use in horticulture is nothing new. Geoﬀ Hamilton was advocating the use of coir composts more than 25 years ago and a number of companies, including the then Scotts Miracle-Gro company, have marketed coir or coir blend composts in the past. Most modern peat-free blends are likely to use some coir. Steve Harper, who chairs the Sustainable Sourcing Scheme steering group, is CEO of Southern Trident, which supplies a range of coir products under the Coco-gro brand name. “As we move away from peat, coir is the only product out there that you could use 100% to replace peat,” he says. “When I ﬁrst joined Sinclair 22 years ago they had a product in their range called Golden Grow, which was 100% coir. It was a really, really good product. It was expensive at the time in comparison to others but it worked fantastically well.” Although coir does have its issues – transportation from Asia and the large volumes of water needed to wash salt from the ﬁbres before processing – Harper believes its carbon footprint might be no worse than for wood ﬁbre, taking into account the energy and pollution penalties incurred by heavy machinery needed to process the latter and the long transportation distances from felling site to production facility. As coir ﬁbre is heavily compressed before loading, massive volumes can be shipped relatively economically. “By the time it gets to this country and we land it at the

we will be unrelenting on choosing the right replacement materials

port closest to the factory, it won’t add many miles. For example, there are three manufacturers within 30 miles of Liverpool docks, so if we deliver in to there, the road miles are comparatively low.” Harper admits water usage remains a signiﬁcant issue but says washing in water collected during the monsoon season could be part of the solution, as could washing the ﬁbres in sea water. “We’re doing work on that idea,” he says. “It seems it washes out the salt but does not add any from the sea water itself.”

Notcutts are really making a peat free statement with displays throughout their centres starting at the front door.