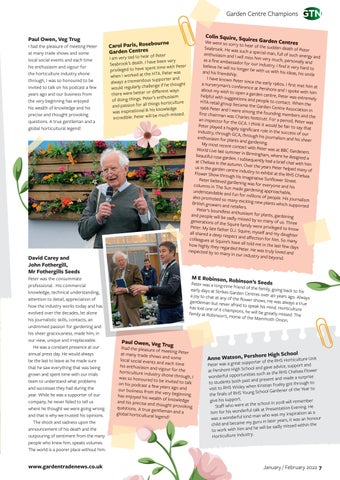 Paul Owen, Veg Trug I had the pleasure of meeting Peter at many trade shows and some local social events and each time his enthusiasm and vigour for the horticulture industry shone through, I was so honoured to be invited to talk on his podcast a few years ago and our business from the very beginning has enjoyed his wealth of knowledge and his precise and thought provoking questions. A true gentleman and a global horticultural legend!

of Peter I am very sad to hear e been very hav I Seabrook’s death. time with Peter nt spe e hav privileged to HTA. Peter was when I worked at the supporter and s ou always a tremend ge if he thought llen cha rly ula would reg erent ways diﬀ there were better or thusiasm en ’s ter Pe s. of doing thing horticulture s ng thi all for n sio and pas knowledge was inspirational &amp; his much missed. be l wil ter Pe incredible.

David Carey and John Fothergill, Mr Fothergills Seeds Peter was the consummate professional. His commercial knowledge, technical understandingg, attention to detail, appreciation of how the industry works today and has h evolved over the decades, let alone his journalistic skills, contacts, an undimmed passion for gardening an nd his sheer graciousness, made him, in n our view, unique and irreplaceable. He was a constant presence at our annual press day. He would always be the last to leave as he made sure that he saw everything that was being grown and spent time with our trials team to understand what problems and successes they had during the year. While he was a supporter of our company, he never failed to tell us where he thought we were going wrong and that is why we trusted his opinions. The shock and sadness upon the announcement of his death and the outpouring of sentiment from the many people who knew him, speaks volumes. The world is a poorer place without him.

s Garden Centre We were so sorry s to hear of the su dden death of Pe Seabrook. He wa ter s such a special m an, full of such en enthusiasm and ergy and I will miss him ve ry much, persona as a ﬁne ambassad lly and or for our industry . I ﬁnd it very hard believe he will no to longer be with us with his ideas, his and his friendship smile . I have known Pete r since the early 1960s. I ﬁrst met a nurseryman’s co him at nference at Persh ore and I spoke wi about my wish to th him open a garden ce ntre, Peter was ex helpful with sugg tremely estions and peop le to contact. Whe HTA retail group n the became the Gard en Centre Associa 1966 Peter and I tion in were among the founding membe ﬁrst chairman wa rs and the s Charles Nottcut t. For a period, Pe an inspector for ter was the GCA. I think it would be fair to Peter played a hu say that gely signiﬁcant ro le in the success industry, through of our GCA, through his journalism and his enthusiasm for pla sheer nts and gardening . My most recent co ntact with Peter was at BBC Gard World Live last su eners mmer in Birming ham, where he de beautiful rose ga signed a rden. I subsequent ly had a brief chat at Chelsea in the with him autumn. Over the years Peter helpe us in the garden d many of centre industry to exhibit at the RH Flower Show thro S Chelsea ugh his imaginativ e Sunﬂower Stre Peter believed ga et. rdening was for everyone and his columns in The Su n made gardening approachable, understandable and fun for million s of people. His jou also promoted so rnalism many exciting ne w plants which su British growers an pported d retailers. Peter’s boundless enthusiasm for pla nts, gardening and people will be sadly missed by so many of us. Thre generations of th e e Squire family we re privileged to kn Peter. My late fat ow her D.J. Squire, m yself and my daug all shared a deep hter respect and aﬀec tion for him. So m colleagues at Squir any e’s have all told m e in the last few how highly they days regarded Peter. He was truly loved an respected by so d many in our indus try and beyond. M E Robinson, Ro bins

on’s Seeds Peter was a long-tim e friend of the fam ily, going back to his early days at Strike s Garden Centres ov er 40 years ago. Alw a joy to chat at any ays of the ﬂower show s. He was always a gentleman but neve true r afraid to speak his mind. Horticulture has lost one of it ch ampions, he will be greatly missed. The family at Robinson’s , Home of the Mamm oth Onion.

Ihad the pleasure of meeting Peter at many trade show s and some local social events and each time his enthusiasm an d vigour for the horticulture indus try shone through, I was so honoured to be invited to talk on his podcast a few years ago and our business from the very beginning has enjoyed his we alth of knowledge and his precise an d thought provoking questions. A true ge ntleman and a global horticultural legend!

porte Peter was a great sup port and l and gave advice, sup oo Sch h Hig at Pershore ea Flower els Ch S ies such as the RH wonderful opportunit prise sur a de ma and t and presen to students both past ou thr gh to en Kristian Foxley got visit to RHS Wisley wh the Year to of r ne g School Garde the ﬁnals of RHS Youn give his support. ember school in 2018 will rem Staﬀ who were at the g. He nin Eve ion tat talk at Presen him for his wonderful on as a ati pir ins my s wa o man wh was a wonderful kind was an honour guru in later years, it child and became my d within the sse mi ly sad he will be to work with him and Horticulture Industry.