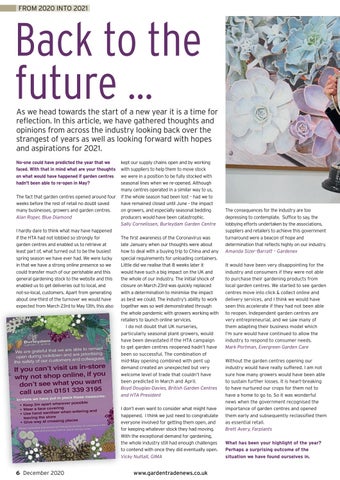 Back to the future …

As we head towards the start of a new year it is a time for reﬂection. In this article, we have gathered thoughts and opinions from across the industry looking back over the strangest of years as well as looking forward with hopes and aspirations for 2021.

No-one could have predicted the year that we faced. With that in mind what are your thoughts on what would have happened if garden centres hadn’t been able to re-open in May?

kept our supply chains open and by working with suppliers to help them to move stock we were in a position to be fully stocked with seasonal lines when we re-opened. Although many centres operated in a similar way to us, The fact that garden centres opened around four if the whole season had been lost – had we to weeks before the rest of retail no doubt saved have remained closed until June – the impact many businesses, growers and garden centres. on growers, and especially seasonal bedding Alan Roper, Blue Diamond producers would have been catastrophic. Sally Cornelissen, Burleydam Garden Centre I hardly dare to think what may have happened The ﬁrst awareness of the Coronavirus was if the HTA had not lobbied so strongly for late January when our thoughts were about garden centres and enabled us to retrieve at how to deal with a buying trip to China and any least part of, what turned out to be the busiest special requirements for unloading containers. spring season we have ever had. We were lucky Little did we realise that 8 weeks later it in that we have a strong online presence so we would have such a big impact on the UK and could transfer much of our perishable and this the whole of our industry. The initial shock of general gardening stock to the website and this closure on March 23rd was quickly replaced enabled us to get deliveries out to local, and with a determination to minimise the impact not-so-local, customers. Apart from generating as best we could. The industry’s ability to work about one-third of the turnover we would have t together was so well demonstrated through expected from March 23rd to May 13th, this also t whole pandemic with growers working with the r retailers to launch online services. I do not doubt that UK nurseries, particularly p seasonal plant growers, would have h been devastated if the HTA campaign to t get garden centres reopened hadn’t have b been so successful. The combination of m mid-May opening combined with pent up d demand created an unexpected but very w welcome level of trade that couldn’t have b been predicted in March and April. B Boyd Douglas-Davies, British Garden Centres a HTA President and I don’t even want to consider what might have h happened. I think we just need to congratulate e everyone involved for getting them open, and fo keeping whatever stock they had moving. for W the exceptional demand for gardening, With t whole industry still had enough challenges the t contend with once they did eventually open. to V Vicky Nuttall, GIMA

The consequences for the industry are too depressing to contemplate. Sufﬁce to say, the lobbying efforts undertaken by the associations, suppliers and retailers to achieve this government turnaround were a beacon of hope and determination that reﬂects highly on our industry. Amanda Sizer-Barratt – Gardenex It would have been very disappointing for the industry and consumers if they were not able to purchase their gardening products from local garden centres. We started to see garden centres move into click & collect online and delivery services, and I think we would have seen this accelerate if they had not been able to reopen. Independent garden centres are very entrepreneurial, and we saw many of them adapting their business model which I’m sure would have continued to allow the industry to respond to consumer needs. Mark Portman, Evergreen Garden Care Without the garden centres opening our industry would have really suffered. I am not sure how many growers would have been able to sustain further losses. It is heart-breaking to have nurtured our crops for them not to have a home to go to. So it was wonderful news when the government recognised the importance of garden centres and opened them early and subsequently reclassiﬁed them as essential retail. Brett Avery, Farplants What has been your highlight of the year? Perhaps a surprising outcome of the situation we have found ourselves in.

In this issue of news and information for garden centre professionals: Noma is coming for you. Back to the future – the year that was and wh...

In this issue of news and information for garden centre professionals: Noma is coming for you. Back to the future – the year that was and wh...