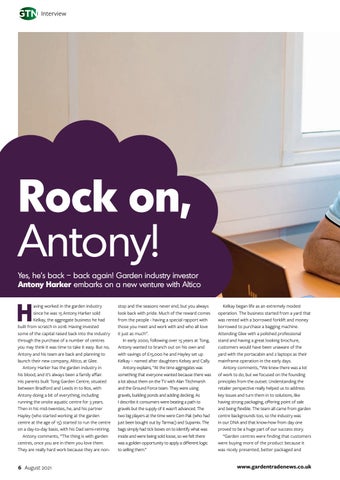 aving worked in the garden industry since he was 15 Antony Harker sold Kelkay, the aggregate business he had built from scratch in 2018. Having invested some of the capital raised back into the industry through the purchase of a number of centres you may think it was time to take it easy. But no, Antony and his team are back and planning to launch their new company, Altico, at Glee. Antony Harker has the garden industry in his blood, and it’s always been a family aﬀair. His parents built Tong Garden Centre, situated between Bradford and Leeds in to 80s, with Antony doing a bit of everything, including running the onsite aquatic centre for 3 years. Then in his mid-twenties, he, and his partner Hayley (who started working at the garden centre at the age of 15) started to run the centre on a day-to-day basis, with his Dad semi-retiring. Antony comments, “The thing is with garden centres, once you are in them you love them. They are really hard work because they are non-

stop and the seasons never end, but you always look back with pride. Much of the reward comes from the people - having a special rapport with those you meet and work with and who all love it just as much”. In early 2000, following over 15 years at Tong, Antony wanted to branch out on his own and with savings of £15,000 he and Hayley set up Kelkay – named after daughters Kelsey and Cally. Antony explains, “At the time aggregates was something that everyone wanted because there was a lot about them on the TV with Alan Titchmarsh and the Ground Force team. They were using gravels, building ponds and adding decking. As I describe it consumers were beating a path to gravels but the supply of it wasn’t advanced. The two big players at the time were Cem Pak (who had just been bought out by Tarmac) and Supamix. The bags simply had tick boxes on to identify what was inside and were being sold loose, so we felt there was a golden opportunity to apply a diﬀerent logic to selling them.”

Kelkay began life as an extremely modest operation. The business started from a yard that was rented with a borrowed forklift and money borrowed to purchase a bagging machine. Attending Glee with a polished professional stand and having a great looking brochure, customers would have been unaware of the yard with the portacabin and 2 laptops as their mainframe operation in the early days. Antony comments, “We knew there was a lot of work to do, but we focused on the founding principles from the outset. Understanding the retailer perspective really helped us to address key issues and turn them in to solutions, like having strong packaging, oﬀering point of sale and being ﬂexible. The team all came from garden centre backgrounds too, so the industry was in our DNA and that know-how from day one proved to be a huge part of our success story. “Garden centres were ﬁnding that customers were buying more of the product because it was nicely presented, better packaged and