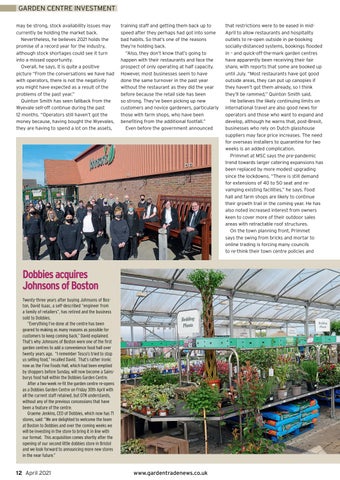 GARDEN CENTRE INVESTMENT may be strong, stock availability issues may currently be holding the market back. Nevertheless, he believes 2021 holds the promise of a record year for the industry, although stock shortages could see it turn into a missed opportunity. Overall, he says, it is quite a positive picture “From the conversations we have had with operators, there is not the negativity you might have expected as a result of the problems of the past year.” Quinton Smith has seen fallback from the Wyevale sell-off continue during the past 12 months. “Operators still haven’t got the money because, having bought the Wyevales, they are having to spend a lot on the assets,

training staff and getting them back up to speed after they perhaps had got into some bad habits. So that’s one of the reasons they’re holding back. “Also, they don’t know that’s going to happen with their restaurants and face the prospect of only operating at half capacity. However, most businesses seem to have done the same turnover in the past year without the restaurant as they did the year before because the retail side has been so strong. They’ve been picking up new customers and novice gardeners, particularly those with farm shops, who have been beneﬁting from the additional footfall.” Even before the government announced

Dobbies acquires Johnsons of Boston Twenty-three years after buying Johnsons of Boston, David Isaac, a self-described “engineer from a family of retailers”, has retired and the business sold to Dobbies. “Everything I’ve done at the centre has been geared to making as many reasons as possible for customers to keep coming back,” David explained. That’s why Johnsons of Boston were one of the ﬁrst garden centres to add a convenience food hall over twenty years ago. “I remember Tesco’s tried to stop us selling food,” recalled David. That’s rather ironic now as the Fine Foods Hall, which had been emptied by shoppers before Sunday, will now become a Sainsburys food hall within the Dobbies Garden Centre. After a two-week re-ﬁt the garden centre re-opens as a Dobbies Garden Centre on Friday 30th April with all the current staff retained, but GTN understands, without any of the previous concessions that have been a feature of the centre. Graeme Jenkins, CEO of Dobbies, which now has 71 stores, said: “We are delighted to welcome the team at Boston to Dobbies and over the coming weeks we will be investing in the store to bring it in line with our format. This acquisition comes shortly after the opening of our second little dobbies store in Bristol and we look forward to announcing more new stores in the near future.”

that restrictions were to be eased in midApril to allow restaurants and hospitality outlets to re-open outside in pe-booking socially-distanced systems, bookings ﬂooded in – and quick-off-the-mark garden centres have apparently been receiving their fair share, with reports that some are booked up until July. “Most restaurants have got good outside areas, they can put up canopies if they haven’t got them already, so I think they’ll be rammed,” Quinton Smith said. He believes the likely continuing limits on international travel are also good news for operators and those who want to expand and develop, although he warns that, post-Brexit, businesses who rely on Dutch glasshouse suppliers may face price increases. The need for overseas installers to quarantine for two weeks is an added complication. Primmet at MSC says the pre-pandemic trend towards larger catering expansions has been replaced by more modest upgrading since the lockdowns. “There is still demand for extensions of 40 to 50 seat and revamping existing facilities,” he says. Food hall and farm shops are likely to continue their growth trail in the coming year. He has also noted increased interest from owners keen to cover more of their outdoor sales areas with retractable roof structures. On the town planning front, Primmet says the swing from bricks and mortar to online trading is forcing many councils to re-think their town centre policies and