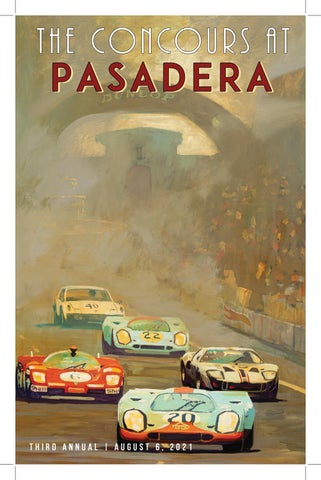 We know you are passionate about your automobiles. We also know time is precious so why not consider making a spa day appointment with yourself. We will help you pamper your automobiles with the world’s nest and purest autocare products.

Welcome, The 2021 Committee of the Concours at Pasadera invites you to enjoy a unique collage of exhibits dedicated to the enjoyment of Automotive and Motorcycle history over the last 100 years. Porsche is the event marque in celebration of its 50th Anniversary of back-to-back wins at Daytona and Le Mans in 1970 and 1971. Celebrated Artist, Simon Bull, captures the spirit of automobile racing in this year’s poster entitled “The Decade of Champions”. Six Classes of Automobiles, Motorcycles, Model Cars, and 30 “Modern Classics” (representing design and technical influences) will compete for the Class Awards by Tiffany. One Vehicle will be presented the “Best of Show” Pasadera Cup, designed by Tiffany and Company of New York. Not just a car show, this year’s Concours features 50 cars that will do laps at Laguna Seca Raceway, Hot Wheels model cars (one of which is Bruce Pascal’s $175,000 Beach Bomb), exceptional food and wines, a silent auction of exceptional art including a Mercedes 500SL. When the day is over, thousands of dollars will have been raised to benefit CASA of Monterey County and The Bridge, an addiction recovery ministry. The launch of Car Week Monterey begins today! You are a part of it. We hope this will be an event to remember for you and others. Sincerely, Rick Barnett, Chairman The Concours at Pasadera 2021 Pasadera Concours

2021 Award Categories Judged Classes Eligible for Best of Show Domestic 1942-1989; manufactured in the United States and Canada International 1942-1989; manufactured outside the United States and Canada Vintage/Pre War 1941 and earlier; representation from all countries Modified All years of build considered. Automobiles that have been significantly altered as viewed by the Jury. Competition All years of build considered. Considered to have competed in an official/sanctioned competitive race. Commercial All years considered. Vehicles used for work or industry. Ex: Trucks, Vans, etc. Best of Show Known as the Pasadera Cup, the Best of Show Award is designed by Tiffany and Company of New York. An exquisite silver chalice, the Best of Show is bestowed upon the finest automobile from the field of entries as selected by the Judges. Modern Classic 1990-2020; Vehicles of influence that represent current trends in design and mechanics. Winner chosen by popular vote by those in attendance. Motorcyle Motorcycles representing 100 years of progressing design and Continued on Page 7 technical influences. 2021 Pasadera Concours

“Today’s professional motorsports scene can be such a sterile environment. ‘Road RacingDrivers of the 60’s and 70’s’ captures time when things weren’t quite so polished; dirty Nomex, shirtless Formula 1 stars and occasional cigarette breaks. The result is an honest, behind-the-fence look at one of the greatest periods in motorsports. Sure, we’ve all seen photos of these guys before, but the fresh perspective makes the book worthy of a spot on your coffee table.” — Classic Motorsports Magazine “Boy, did your book bring back some happy memories. I must say I hadn’t realized what a super photographer you were. If I had known at the time, I would have asked you to take some pictures for my CV!” — Sir Stirling Moss “Thanks for providing some great memories of racing past. This is a fantastic collection of photos in one great book.” — Tony Adamowicz Page 6

Alumni A limited number of 2019 Concours at Pasadera exhibitions will be invited by the Concours Committee to present in the August 6, 2021 Alumni Exhibition. Die Cast Designer Award In recognition of designers Larry Wood and Ryu Asada. Chosen by the three-member panel as the most significant exhibition piece at the show. 2019 Award Winners Modern Classics 2014 Aston Martin Vanquish

His art is currently represented exclusively, by his own company Simon Bull Studios of Carmel CA and MEUSE Gallery on Carmel’s Ocean Avenue. Simon Bull Studios contracts with and supplies a network of fine art galleries around the world including Cutter &amp; Cutter Fine Art, Park West Gallery and others. He has been represented in the UK by, London Contemporary Art and DeMontfort Fine Art; as well as in the USA with Media Arts Group. His worldwide licensing agent is Art Brands Group. In 2007 he was invited to create a series of paintings that celebrated the life of Muhammad Ali. Many of these works are now on permanent display in the Muhammad Ali Center in Louisville, Kentucky. He has spoken on behalf of the Muhammad Ali Center at the Vancouver Film Festival for the premiere of the movie Facing Ali. In 2009 he was commissioned to paint US President Barack Obama by boxing legend Muhammad Ali. His two joint portraits of Barack Obama and Muhammad Ali were unveiled at the Kentucky Bluegrass Ball on the eve of the Presidential Inauguration in Washington DC by actress Ashley Judd. Page 8

The Source For Your Ultimate Garage! Quality USA Made Reproduction Signs and More!

The 2021 Concours at Pasadera Itinerary

The 2021 Concours at Pasadera

Shop Equipment USA was established to provide our customers with quality automotive shop equipment and discount prices. We purchase our car lifts directly from the factory and pass the truckload volume discounts on to you. Our Hayward, CA warehouse has the largest inventory of two post, four post, and motorcycle lifts on the West Coast. We stock fifteen different models of lifts from 8,000 lb to 15,000 lb capacity and also offer truck lifts up to 60,000 lbs. Our experts can assist you with choosing the right lift for you.