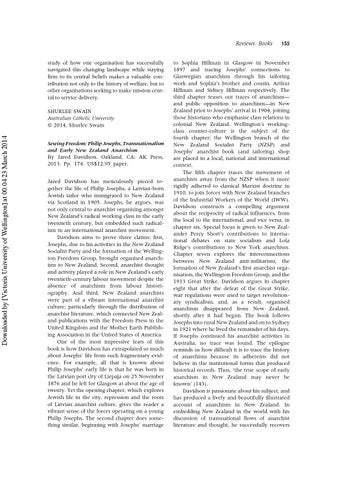 Reviews: Books study of how one organisation has successfully navigated this changing landscape while staying firm to its central beliefs makes a valuable contribution not only to the history of welfare, but to other organisations seeking to make mission central to service delivery.

SHURLEE SWAIN Australian Catholic University © 2014, Shurlee Swain Sewing Freedom: Philip Josephs, Transnationalism and Early New Zealand Anarchism. By Jared Davidson. Oakland, CA: AK Press, 2013. Pp. 174. US$12.95 paper. Jared Davidson has meticulously pieced together the life of Philip Josephs, a Latvian-born Jewish tailor who immigrated to New Zealand via Scotland in 1905. Josephs, he argues, was not only central to anarchist organising amongst New Zealand’s radical working class in the early twentieth century, but embedded such radicalism in an international anarchist movement. Davidson aims to prove three claims: first, Josephs, due to his activities in the New Zealand Socialist Party and the formation of the Wellington Freedom Group, brought organised anarchism to New Zealand. Second, anarchist thought and activity played a role in New Zealand’s early twentieth-century labour movement despite the absence of anarchism from labour historiography. And third, New Zealand anarchists were part of a vibrant international anarchist culture, particularly through the distribution of anarchist literature, which connected New Zealand publications with the Freedom Press in the United Kingdom and the Mother Earth Publishing Association in the United States of America. One of the most impressive feats of this book is how Davidson has extrapolated so much about Josephs’ life from such fragmentary evidence. For example, all that is known about Philip Josephs’ early life is that he was born in the Latvian port city of Liepaja on 25 November 1876 and he left for Glasgow at about the age of twenty. Yet the opening chapter, which explores Jewish life in the city, repression and the roots of Latvian anarchist culture, gives the reader a vibrant sense of the forces operating on a young Philip Josephs. The second chapter does something similar, beginning with Josephs’ marriage

to Sophia Hillman in Glasgow in November 1897 and tracing Josephs’ connections to Glaswegian anarchism through his tailoring work and Sophia’s brother and cousin, Arthur Hillman and Sidney Hillman respectively. The third chapter teases out traces of anarchism— and public opposition to anarchism—in New Zealand prior to Josephs’ arrival in 1904, joining those historians who emphasise class relations in colonial New Zealand. Wellington’s workingclass counter-culture is the subject of the fourth chapter; the Wellington branch of the New Zealand Socialist Party (NZSP) and Josephs’ anarchist book (and tailoring) shop are placed in a local, national and international context. The fifth chapter traces the movement of anarchists away from the NZSP when it more rigidly adhered to classical Marxist doctrine in 1910, to join forces with New Zealand branches of the Industrial Workers of the World (IWW). Davidson constructs a compelling argument about the reciprocity of radical influences, from the local to the international, and vice versa, in chapter six. Special focus is given to New Zealander Percy Short’s contributions to international debates on state socialism and Lola Ridge’s contributions to New York anarchism. Chapter seven explores the interconnections between New Zealand anti-militarism, the formation of New Zealand’s first anarchist organisation, the Wellington Freedom Group, and the 1913 Great Strike. Davidson argues in chapter eight that after the defeat of the Great Strike, war regulations were used to target revolutionary syndicalism, and, as a result, organised anarchism disappeared from New Zealand, shortly after it had begun. The book follows Josephs into rural New Zealand and on to Sydney in 1921 where he lived the remainder of his days. If Josephs continued his anarchist activities in Australia, no trace was found. The epilogue reminds us how difficult it is to trace the history of anarchism because its adherents did not believe in the institutional forms that produced historical records. Thus, ‘the true scope of early anarchism in New Zealand may never be known’ (143). Davidson is passionate about his subject, and has produced a lively and beautifully illustrated account of anarchism in New Zealand. In embedding New Zealand in the world with his discussion of transnational flows of anarchist literature and thought, he successfully recovers

and defends an ideology that has often been misrepresented as individual acts of terrorism. Philip Josephs’ communist anarchist philosophy is clearly and thoughtfully introduced in chapter four (56), and elucidated across the monograph, especially in relation to the work of Bakunin, Kropotkin and Emma Goldman. If anything, the discussion of anarchist philosophy could have been extended, particularly focusing on the work of Emma Goldman. Davidson bemoans the fact that there was little evidence of female anarchists in New Zealand, but gender can be recovered in other ways. An unpacking of essays such as Emma Goldman’s ‘Tragedy of Women’s Emancipation’ could have provided a sense of what appealed to those women who attended Freedom Group socials in 1913. Or perhaps some reflection on Freedom Group ‘free society socials’ that did away with formal hierarchies but thanked ladies for their assistance in making the night a success. But these are just quibbles. The greatest strength of this work is its transnationalism; anarchism was always on the move, yet this movement took radical hold in New Zealand, thanks to the tireless efforts of Philip Josephs. CYBÈLE LOCKE Victoria University of Wellington © 2014, Cybèle Locke Melbourne before Mannix: Catholics in Public Life 1880–1920. By Patrick Morgan. Ballan, Vic.: Connorcourt, 2012. Pp. 234. A$29.95 paper. This valuable and accessible study focuses on the literary and intellectual activities of lay and clerical Catholics grouped around the journal Austral Light (1892–1920), which flourished when Thomas Carr was Catholic archbishop of Melbourne. The narrative is enhanced with a range of suitable archival photographs of personalities and events. Author Patrick Morgan aims to reverse public perceptions that ‘the great outburst of activity in the archdiocese of Melbourne began when Archbishop Daniel Mannix came’ (1). Morgan, indeed, makes a strong case that Mannix inherited a thriving diocese. He concentrates on fourteen writers and organisers from Carr’s ‘active Catholic elite’.

These activists ran, not always on their own, organisations such as the Australian Catholic Federation, the Australian Catholic Truth Society, the Catholic Young Men’s Society, the Hibernians, the Celtic Club and the Newman Society. In addition to Austral Light, they published in the Advocate and Tribune. They supported the establishment and growth of St Vincent’s Hospital and Newman College. Nine of the book’s thirteen chapters deal in chronological order with the period when Carr was in charge from 1887 until 1917. They are preceded by two chapters summarising Catholic life in Melbourne before Carr’s arrival; and they are followed by a chapter on Mannix’s first three years when, under the strains of a traumatic war in Europe and a rebellion in Ireland, the consensus in the Austral Light group broke up. Since for four years Mannix was a vigorous coadjutor to an ailing Carr, the last two Carr-era chapters are, indeed, centred on Mannix. Morgan acknowledges his debt to Thomas Boland’s biography of Carr but concludes that he exaggerated Carr’s difficulties with Mannix. Attitudes of this educated Catholic elite are discussed regarding topics such as state aid for Catholic schools, support for Irish Home Rule, Federation, anti-Catholic prejudice, opposition to the Boer War, the Dreyfus case, the Australian Labor Party and then the First World War. The Ned Kelly story is covered in a one-sentence parenthesis. Not covered are the Austral Light group’s positions on the coercive treatment of Aborigines in the 1890s or the White Australia policy. Morgan brings to his task years of experience as a writer. A regular contributor to Quadrant and literary journals, he recently completed the editing of two large volumes of the letters and papers of Bartholomew Santamaria. This book is speckled with interesting asides