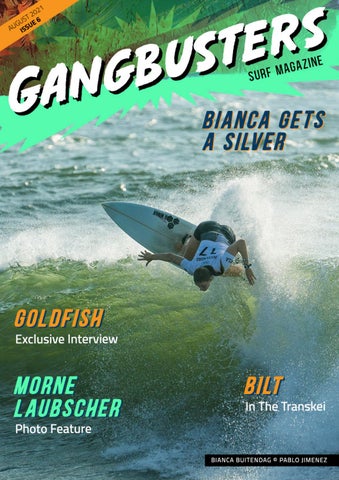 Can you imagine what it must feel like to have an Olympic medal? Doesn’t matter what it’s made of, whether it be gold, silver, bronze, or made from recycled parts of mobile phones (true story – see here https://www.insider. com/tokyo-olympicsmedals-recycled-cellphones-2021-7).

Congratulations, Bianca Buitendag, you legend. Thanks to all the brands who are supporting this little venture, and also to all those hardcore surfers who are reading it, providing feedback, and tuning us what’s what. We dig the feedback. Remember that all ads are clickable to the online stores, and all videos are watchable in the mag.

Goldfish is an electronic duo originating from Cape Town, South Africa, consisting of Dominic Peters and David Poole. They create unique and pretty sick dance music containing house, pop, jazz, and African music elements. They also surf as often as they can. We caught up with Dom, waiting for a plane in Dallas with Dave.

GB: WHAT’S GOING ON WITH GOLDFISH? ARE YOU ON SOME SORT OF MASSIVE TOUR? GoldFish is back, baby. It was actually our 5th year anniversary of living and touring in the

States on the 4th of July. We celebrated with a sold-out 3000 capacity party on the banks of the Hudson River with the fireworks to finish it off. It was wild. It felt like everyone was ready to party after over a year of being indoors. It feels

like Plett Rage for adults every show we play at the moment. But seriously, we’re super stoked and grateful to be able to tour again, especially as so much of the world is still in lockdown. We’ve been touring solidly for pretty much 15 years, so the silver lining of the past year was the opportunity to catch up on a lot of sleep and take stock of everything. That and, more importantly, deciding what we want to do next.

WHERE ARE YOU HEADING TO RIGHT NOW, AND WHERE TO AFTER THAT? We’re currently on a plane from San Diego, where we live now, to Nashville for a gig. Then on to Atlanta and Charleston, South Carolina. Never been to Nashville or Charleston, so it’s gonna be an adventure.

THE NEW SINGLE IS KILLING IT. TELL US ABOUT IT. Thanks, bru. We rarely do reworks, but this is a version of that classic from the 80’s ‘Everlasting Love’, and we gave it a GF spin. More jazzy and has a slower groove than we usually do. Also allows us to continue our animated music vid series with our little guy GoldFish man getting himself into various amounts of trouble in each instalment.

IS THERE A NEW ALBUM? We’re working on a new album as we speak. The tricky thing is choosing from all the music we made during the lockdown and making sure it all links together. We’ll be releasing a bunch of new tracks from it through the second half of this year.

WHEN WILL YOU BE HEADING BACK THIS WAY?

Missing SA so much! Usually, we’d sneak back round about now for some shows, but obviously, that’s not possible at the mo. Been watching the Surfline cam of JBay firing with all our mates going nuts and then surfing 2-ft beachies with 60-100

guys. Cali gives you a whole new appreciation of how incredible we have it in SA. But for our careers, we are exactly where we need to be.

WHERE ARE YOU GETTING YOUR SURF FIXES?

I surf Blacks and the reefs around La Jolla a lot, and Dave lives a bit further up and surfs around Del Mar. Lots of juvenile Great Whites buzzing around there at the moment, and we got chased out the other day. Nothing like home, though. We shoot up to Trestles when it’s flat down here and have done a few Hawaii missions. Stayed with Jordy a while back, and he took me out at solid Haleiwa, which

was terrifying and awesome all at once. Also been epic surfing in Mex at the points around Salina Cruz and Nicaragua, which is so user friendly, so we’re making use of what’s around us this side.

WHO WAS IN THE BARREL AT KANDOOMA, AND WHAT WERE YOU DOING THERE?

That Kandooma mission was such a luck. I was there in May and caught an early swell. Most of the crew were all older longboarders staying on the island, and they had all headed off to surf some of the other chilled spots and somehow had it all to myself. To this day, the best ocean moment where it all came together.

and friends, we miss the waves. We are so spoilt in SA it’s ridiculous. And I’ll never complain about crowds after living in SoCal. It gets good here, but the crowds are next level.

WHAT DO YOU MISS ABOUT SA?

A new appreciation of doing what we love for a living and being healthy and stoked on surfing.

WHAT IS THE BEST THING ABOUT THE LIVES OF GOLDFISH RIGHT NOW?

For any brand, a 25th anniversary is a big deal. So for Bilt’s 25th anniversary, the entire team (those in the country) headed down to the Transkei for some R&D and got a couple of right-hand sand-bottom bombs.

Big congrats to the Bilt team for their contribution to surfing in South Africa over the last 25 years.

LIVES: 42 years old and lives on a farm cottage outside Stellenbosch with Susanne.Susanne? Susanne Joubert @mioko.sea is my life partner, best friend and surf adventurer. My biggest inspiration and driving force in getting me into pursuing my passion. STARTED?

Been shooting for 7 years and was brought into the game by good friends Douglas Cockwell and Riehan Bakkes.

Morne and his equipment

@nixonsouthafrica keeps me dialled in with the tides. @sunmud keeps me protected from the rays.

@oceancollective Supplying my clients with the highest quality ocean art prints from my online gallery.

The best thing about living in the Boland? Most of the time, it’s not about the waves. With the elevation of the mountains around our rugged coastline, there are so many variables. Offshore here is onshore just around the corner, and it will turn offshore again, but as you paddle out, the onshore picks up. You need to stay tuned in this area.

Lefts around the corner

The s c i p m O ly It was hard at first to get your head around the Olympics, and there was a bit of gloom and despondency about it. The venue seemed a bit suss, Jordy was injured, and it just didn’t seem that important at first. It was almost like the media was underplaying it instead of the endless stream of mediocre content we are accustomed to from the World Surf League.

All of this faded away as visuals and news of Bianca Buitendag and Greg Emslie started filtering through. As the visuals started appearing and we could find the webcast, the excitement quickly grew and became tangible.

Then, finally, Bianca did her usual and showed everyone what actual backhand power surfing is all about.

Bianca doesn’t mess around. She sets her mind to something and does it.

in that final. She then donated every cent of her $25k ( R363,000) prize money to charities in South Africa. When Bianca sets her mind on something, she finishes the job.

I was in Australia when she made her first Championship Tour final in 2014, and she placed second next to Steph Gilmore

It was somewhat unfortunate that she didn’t

find the waves in the final because she definitely had the moves and the rhythm to win the event. Still, Carissa Moore was a worthy champion,

and Bianca’s Silver Medal is an incredible achievement. Her coach, Greg Emslie, also deserves major credit for his role in Bianca’s journey to the final.

This WSL Speciality Event is an invitationonly event for 20 of the top Men’s surfers from South Africa and Africa.

“We are very proud to kick off our events with a WSL Speciality Event for South African and African surfers. This is a wonderful opportunity for some of our top surfers, including our best African surfers, to compete for an impressive prize purse. The competition will be the first-ever professional surfing event in the Northern Cape.

It will do much to help grow surf tourism in the area and to develop surfing as a sport and lifestyle along the Northern Cape coast,”

along with wildcards Dale Staples and Amandla Foundation Junior, Surprise Ntokozo and the topranked WSL Africa Junior QS surfer, Luke Thompson. The competition format will see all the surfers compete in two, four-man heats. The top eight surfers with the highest two-wave total will advance to the Semifinals. The waiting period will allow organisers to run the event in the best possible conditions at Hondeklip Bay. The Experience Northern Cape Namakwa Challenge presented by Billabong Adventure Division

Bay, Namakwa, Northern Cape / South Africa. For all results, photos, video highlights and press releases, log on to WorldSurfLeague.com. The Namakwa Challenge is a WSL Speciality Event organized by Amandla Surf Foundation and has the institutional support of Northern Cape Tourism – Experience Northern Cape, as for the sponsorship of Billabong Adventure Division and Media Partners Africa Now and Monster Energy.

surfing in the olympics The 2024 Olympics are not that far away, and the surfing venue is Teahupo’o. Surfing being part of the Olympics has changed

the very structure of our sport, and it will undoubtedly lead to more incredible things. While we have already congratulated Bianca, it was the super coach and manager Greg Emslie who deserves credit for a job well done.

JJF withdraws from the season. First, surfs a very mediocre Olympics, nursing a few turns, before pulling out of the following two events in Mexico and Tahiti.

However, there is a soft rumour floating around from an unreliable

source that Tahiti has already been cancelled. So John John, currently ranked 10th, probably did the sums and realized that he couldn’t make it into the top 5 in one more event. So will we see more surfers pulling out? The answer is yes. JACQUES MARAIS © RED BULL CONTENT POOL

On the other hand, competitive surfing is well and truly alive in South Africa, with many events coming up. These include the SA Masters at Vic,

the SA Longboards at Point, JBay, The La Muse Classic at Muizenberg, and the Namakwa Challenge. It’s all happening. After the successful Rip Curl E-Pro online surfing event last year, our top surfers made it to the Firewire E-Pro Global Final. At the time of going to press, we had Shane Sykes, Dale Staples and Sophie Bell all into the semifinals.

You can pick up the final results here https://www. surfwebseries.com/

More rumours circulating about a new big wave tour, seen as the WSL are looking to shelve

their big wave tour completely next year. Quite a few surfers have dedicated their lives to surfing and competing on enormous waves, and they’re going to need a platform to show their stuff.

A new big wave tour would be a great idea, but finding funders or sponsors is not easy. Let’s hope they pull something off.

and surf events in South Africa, and a few people have started stepping up and doing things for themselves.

Hats off to them. It has been a very long time of little change, and the pandemic has changed things even more, but things are set to change. The times they are a-changing, a revolution is not a dinner party etc. etc. 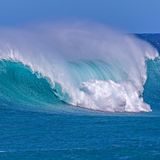