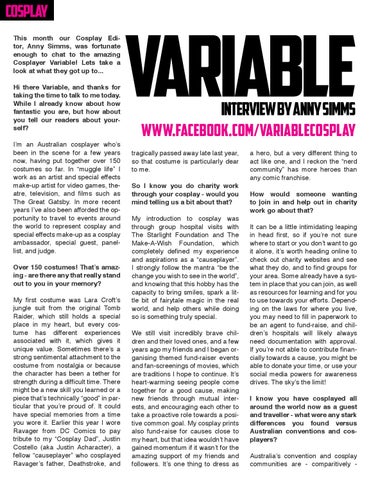 COSPLAY This month our Cosplay Editor, Anny Simms, was fortunate enough to chat to the amazing Cosplayer Variable! Lets take a look at what they got up to... Hi there Variable, and thanks for taking the time to talk to me today. While I already know about how fantastic you are, but how about you tell our readers about yourself? I’m an Australian cosplayer who’s been in the scene for a few years now, having put together over 150 costumes so far. In “muggle life” I work as an artist and special effects make-up artist for video games, theatre, television, and films such as The Great Gatsby. In more recent years I’ve also been afforded the opportunity to travel to events around the world to represent cosplay and special effects make-up as a cosplay ambassador, special guest, panellist, and judge. Over 150 costumes! That’s amazing - are there any that really stand out to you in your memory? My first costume was Lara Croft’s jungle suit from the original Tomb Raider, which still holds a special place in my heart, but every costume has different experiences associated with it, which gives it unique value. Sometimes there’s a strong sentimental attachment to the costume from nostalgia or because the character has been a tether for strength during a difficult time. There might be a new skill you learned or a piece that’s technically “good” in particular that you’re proud of. It could have special memories from a time you wore it. Earlier this year I wore Ravager from DC Comics to pay tribute to my “Cosplay Dad”, Justin Costello (aka Justin Acharacter), a fellow “causeplayer” who cosplayed Ravager’s father, Deathstroke, and

www.facebook.com/variablecosplay tragically passed away late last year, so that costume is particularly dear to me. So I know you do charity work through your cosplay - would you mind telling us a bit about that? My introduction to cosplay was through group hospital visits with The Starlight Foundation and The Make-A-Wish Foundation, which completely defined my experience and aspirations as a “causeplayer”. I strongly follow the mantra “be the change you wish to see in the world”, and knowing that this hobby has the capacity to bring smiles, spark a little bit of fairytale magic in the real world, and help others while doing so is something truly special. We still visit incredibly brave children and their loved ones, and a few years ago my friends and I began organising themed fund-raiser events and fan-screenings of movies, which are traditions I hope to continue. It’s heart-warming seeing people come together for a good cause, making new friends through mutual interests, and encouraging each other to take a proactive role towards a positive common goal. My cosplay prints also fund-raise for causes close to my heart, but that idea wouldn’t have gained momentum if it wasn’t for the amazing support of my friends and followers. It’s one thing to dress as

a hero, but a very different thing to act like one, and I reckon the “nerd community” has more heroes than any comic franchise. How would someone wanting to join in and help out in charity work go about that? It can be a little intimidating leaping in head first, so if you’re not sure where to start or you don’t want to go it alone, it’s worth heading online to check out charity websites and see what they do, and to find groups for your area. Some already have a system in place that you can join, as well as resources for learning and for you to use towards your efforts. Depending on the laws for where you live, you may need to fill in paperwork to be an agent to fund-raise, and children’s hospitals will likely always need documentation with approval. If you’re not able to contribute financially towards a cause, you might be able to donate your time, or use your social media powers for awareness drives. The sky’s the limit! I know you have cosplayed all around the world now as a guest and traveller - what were any stark differences you found versus Australian conventions and cosplayers? Australia’s convention and cosplay communities are - comparitively - 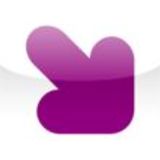 What are the must have games this Christmas? Check our special report. Plus our awesome cosplayer Raychul Moore talks to us in our Cosplay S...

What are the must have games this Christmas? Check our special report. Plus our awesome cosplayer Raychul Moore talks to us in our Cosplay S...