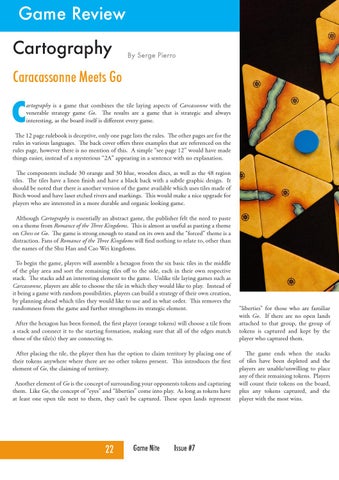 artography is a game that combines the tile laying aspects of Carcassonne with the venerable strategy game Go. The results are a game that is strategic and always interesting, as the board itself is different every game.

The 12 page rulebook is deceptive, only one page lists the rules. The other pages are for the rules in various languages. The back cover offers three examples that are referenced on the rules page, however there is no mention of this. A simple “see page 12” would have made things easier, instead of a mysterious “2A” appearing in a sentence with no explanation. The components include 30 orange and 30 blue, wooden discs, as well as the 48 region tiles. The tiles have a linen finish and have a black back with a subtle graphic design. It should be noted that there is another version of the game available which uses tiles made of Birch wood and have laser etched rivers and markings. This would make a nice upgrade for players who are interested in a more durable and organic looking game. Although Cartography is essentially an abstract game, the publisher felt the need to paste on a theme from Romance of the Three Kingdoms. This is almost as useful as pasting a theme on Chess or Go. The game is strong enough to stand on its own and the “forced” theme is a distraction. Fans of Romance of the Three Kingdoms will find nothing to relate to, other than the names of the Shu Han and Cao Wei kingdoms. To begin the game, players will assemble a hexagon from the six basic tiles in the middle of the play area and sort the remaining tiles off to the side, each in their own respective stack. The stacks add an interesting element to the game. Unlike tile laying games such as Carcassonne, players are able to choose the tile in which they would like to play. Instead of it being a game with random possibilities, players can build a strategy of their own creation, by planning ahead which tiles they would like to use and in what order. This removes the randomness from the game and further strengthens its strategic element. After the hexagon has been formed, the first player (orange tokens) will choose a tile from a stack and connect it to the starting formation, making sure that all of the edges match those of the tile(s) they are connecting to. After placing the tile, the player then has the option to claim territory by placing one of their tokens anywhere where there are no other tokens present. This introduces the first element of Go, the claiming of territory. Another element of Go is the concept of surrounding your opponents tokens and capturing them. Like Go, the concept of “eyes” and “liberties” come into play. As long as tokens have at least one open tile next to them, they can’t be captured. These open lands represent

“liberties” for those who are familiar with Go. If there are no open lands attached to that group, the group of tokens is captured and kept by the player who captured them. The game ends when the stacks of tiles have been depleted and the players are unable/unwilling to place any of their remaining tokens. Players will count their tokens on the board, plus any tokens captured, and the player with the most wins. 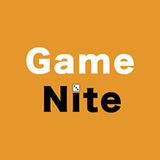