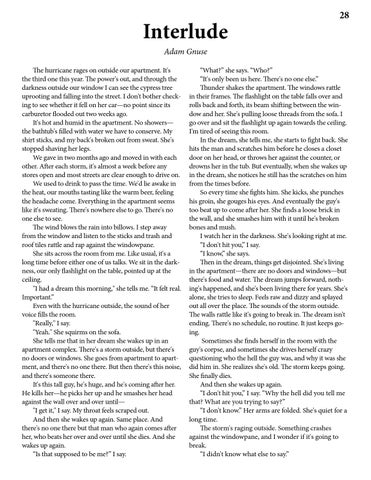 The hurricane rages on outside our apartment. It's the third one this year. The power's out, and through the darkness outside our window I can see the cypress tree uprooting and falling into the street. I don't bother checking to see whether it fell on her car—no point since its carburetor flooded out two weeks ago. It's hot and humid in the apartment. No showers— the bathtub's filled with water we have to conserve. My shirt sticks, and my back's broken out from sweat. She's stopped shaving her legs. We gave in two months ago and moved in with each other. After each storm, it's almost a week before any stores open and most streets are clear enough to drive on. We used to drink to pass the time. We'd lie awake in the heat, our mouths tasting like the warm beer, feeling the headache come. Everything in the apartment seems like it's sweating. There's nowhere else to go. There's no one else to see. The wind blows the rain into billows. I step away from the window and listen to the sticks and trash and roof tiles rattle and rap against the windowpane. She sits across the room from me. Like usual, it's a long time before either one of us talks. We sit in the darkness, our only flashlight on the table, pointed up at the ceiling. "I had a dream this morning," she tells me. “It felt real. Important.” Even with the hurricane outside, the sound of her voice fills the room. "Really," I say. "Yeah." She squirms on the sofa. She tells me that in her dream she wakes up in an apartment complex. There's a storm outside, but there's no doors or windows. She goes from apartment to apartment, and there's no one there. But then there's this noise, and there's someone there. It's this tall guy, he's huge, and he's coming after her. He kills her—he picks her up and he smashes her head against the wall over and over until— "I get it," I say. My throat feels scraped out. And then she wakes up again. Same place. And there's no one there but that man who again comes after her, who beats her over and over until she dies. And she wakes up again. “Is that supposed to be me?” I say.

“What?” she says. “Who?” “It's only been us here. There's no one else.” Thunder shakes the apartment. The windows rattle in their frames. The flashlight on the table falls over and rolls back and forth, its beam shifting between the window and her. She's pulling loose threads from the sofa. I go over and sit the flashlight up again towards the ceiling. I'm tired of seeing this room. In the dream, she tells me, she starts to fight back. She hits the man and scratches him before he closes a closet door on her head, or throws her against the counter, or drowns her in the tub. But eventually, when she wakes up in the dream, she notices he still has the scratches on him from the times before. So every time she fights him. She kicks, she punches his groin, she gouges his eyes. And eventually the guy's too beat up to come after her. She finds a loose brick in the wall, and she smashes him with it until he's broken bones and mush. I watch her in the darkness. She's looking right at me. “I don't hit you,” I say. “I know,” she says. Then in the dream, things get disjointed. She's living in the apartment—there are no doors and windows—but there's food and water. The dream jumps forward, nothing's happened, and she's been living there for years. She's alone, she tries to sleep. Feels raw and dizzy and splayed out all over the place. The sounds of the storm outside. The walls rattle like it's going to break in. The dream isn't ending. There's no schedule, no routine. It just keeps going. Sometimes she finds herself in the room with the guy's corpse, and sometimes she drives herself crazy questioning who the hell the guy was, and why it was she did him in. She realizes she's old. The storm keeps going. She finally dies. And then she wakes up again. “I don't hit you,” I say. “Why the hell did you tell me that? What are you trying to say?” “I don't know.” Her arms are folded. She's quiet for a long time. The storm's raging outside. Something crashes against the windowpane, and I wonder if it's going to break. “I didn't know what else to say.” 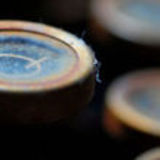