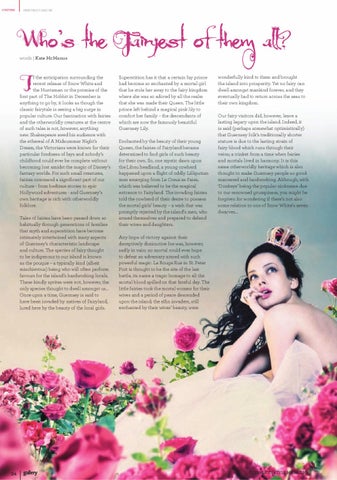 f the anticipation surrounding the recent release of Snow White and the Huntsman or the promise of the first part of The Hobbit in December is anything to go by, it looks as though the classic fairytale is seeing a big surge in popular culture. Our fascination with fairies and the otherworldly creatures at the centre of such tales is not, however, anything new. Shakespeare awed his audience with the ethereal of A Midsummer Night’s Dream, the Victorians were known for their particular fondness of fays and nobody’s childhood could ever be complete without becoming lost amidst the magic of Disney’s fantasy worlds. For such small creatures, fairies command a significant part of our culture - from bedtime stories to epic Hollywood adventures - and Guernsey’s own heritage is rich with otherworldly folklore. Tales of fairies have been passed down so habitually through generations of families that myth and superstition have become intimately intertwined with many aspects of Guernsey’s characteristic landscape and culture. The species of fairy thought to be indigenous to our island is known as the pouque – a typically kind (albeit mischievous) being who will often perform favours for the island’s hardworking locals. These kindly sprites were not, however, the only species thought to dwell amongst us… Once upon a time, Guernsey is said to have been invaded by natives of Fairyland, lured here by the beauty of the local girls.

Superstition has it that a certain fay prince had become so enchanted by a mortal girl that he stole her away to the fairy kingdom where she was so adored by all the realm that she was made their Queen. The little prince left behind a magical pink lily to comfort her family – the descendants of which are now the famously beautiful Guernsey Lily. Enchanted by the beauty of their young Queen, the fairies of Fairyland became determined to find girls of such beauty for their own. So, one mystic dawn upon the Lihou headland, a young cowherd happened upon a flight of oddly Lilliputian men emerging from Le Creux es Faies, which was believed to be the magical entrance to Fairyland. The invading fairies told the cowherd of their desire to possess the mortal girls’ beauty – a wish that was promptly rejected by the island’s men, who armed themselves and prepared to defend their wives and daughters.

wonderfully kind to them and brought the island into prosperity. Yet no fairy can dwell amongst mankind forever, and they eventually had to return across the seas to their own kingdom. Our fairy visitors did, however, leave a lasting legacy upon the island. Indeed, it is said (perhaps somewhat optimistically) that Guernsey folk’s traditionally shorter stature is due to the lasting strain of fairy blood which runs through their veins; a trinket from a time when fairies and mortals lived in harmony. It is this same otherworldly heritage which is also thought to make Guernsey people so goodmannered and hardworking. Although, with ‘Donkeys’ being the popular nickname due to our renowned grumpiness, you might be forgiven for wondering if there’s not also some relation to one of Snow White’s seven dwarves…

Any hope of victory against their deceptively diminutive foe was, however, sadly in vain: no mortal could ever hope to defeat an adversary armed with such powerful magic. La Rouge Rue in St. Peter Port is thought to be the site of the last battle, its name a tragic homage to all the mortal blood spilled on that fateful day. The little fairies took the mortal women for their wives and a period of peace descended upon the island; the elfin invaders, still enchanted by their wives’ beauty, were 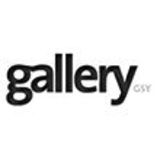