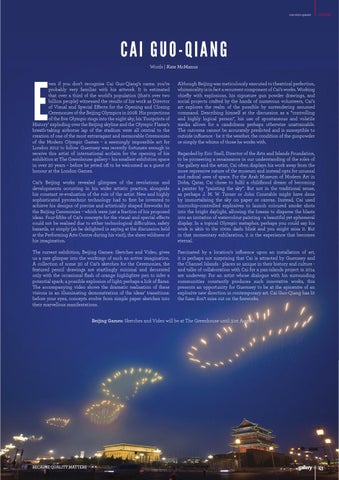 ven if you don’t recognise Cai Guo-Qiang’s name, you’re probably very familiar with his artwork. It is estimated that over a third of the world’s population (that’s over two billion people) witnessed the results of his work as Director of Visual and Special Effects for the Opening and Closing Ceremonies of the Beijing Olympics in 2008. His projections of the five Olympic rings into the night sky, his ‘Footprints of History’ exploding over the Beijing skyline and the Olympic Flame’s breath-taking airborne lap of the stadium were all central to the creation of one of the most extravagant and memorable Ceremonies of the Modern Olympic Games – a seemingly impossible act for London 2012 to follow. Guernsey was recently fortunate enough to receive this artist of international acclaim for the opening of his exhibition at The Greenhouse gallery – his smallest exhibition space in over 20 years – before he jetted off to be welcomed as a guest of honour at the London Games. Cai’s Beijing works revealed glimpses of the revolutions and developments occurring in his wider artistic practice, alongside his constant re-evaluation of the role of the artist. New and highly sophisticated pyrotechnic technology had to first be invented to achieve his designs of precise and artistically shaped fireworks for the Beijing Ceremonies – which were just a fraction of his proposed ideas. Four-fifths of Cai’s concepts for the visual and special effects could not be realised due to either technological difficulties, safety hazards, or simply (as he delighted in saying at the discussion held at the Performing Arts Centre during his visit), the sheer wildness of his imagination. The current exhibition, Beijing Games: Sketches and Video, gives us a rare glimpse into the workings of such an active imagination. A collection of some 30 of Cai’s sketches for the Ceremonies, the featured pencil drawings are startlingly minimal and decorated only with the occasional flash of orange highlighter pen to infer a potential spark; a possible explosion of light; perhaps a lick of flame. The accompanying video shows the dramatic realisation of these visions in an illuminating demonstration of the ideas’ transitions: before your eyes, concepts evolve from simple paper sketches into their marvellous manifestations.

Although Beijing was meticulously executed to theatrical perfection, whimsicality is in fact a recurrent component of Cai’s works. Working chiefly with explosions, his signature gun powder drawings, and social projects crafted by the hands of numerous volunteers, Cai’s art explores the realm of the possible by surrendering assumed command. Describing himself at the discussion as a “controlling and highly logical person”, his use of spontaneous and volatile media allows for a candidness perhaps otherwise unattainable. The outcome cannot be accurately predicted and is susceptible to outside influence - be it the weather, the condition of the gunpowder or simply the whims of those he works with. Regarded by Eric Snell, Director of the Arts and Islands Foundation, to be pioneering a renaissance in our understanding of the roles of the gallery and the artist, Cai often displays his work away from the more repressive nature of the museum and instead opts for unusual and radical uses of space. For the Arab Museum of Modern Art in Doha, Qatar, Cai chose to fulfil a childhood dream of becoming a painter by “painting the sky”. But not in the traditional sense, as perhaps J. M. W. Turner or John Constable might have done by immortalising the sky on paper or canvas. Instead, Cai used microchip-controlled explosives to launch coloured smoke shots into the bright daylight, allowing the breeze to disperse the blasts into an imitation of watercolour painting - a beautiful yet ephemeral display. In a topical Olympic metaphor, perhaps you could say his work is akin to the 100m dash: blink and you might miss it. But in that momentary exhilaration, it is the experience that becomes eternal. Fascinated by a location’s influence upon an installation of art, it is perhaps not surprising that Cai is attracted by Guernsey and the Channel Islands - places so unique in their history and culture and talks of collaboration with Cai for a pan-islands project in 2014 are underway. For an artist whose dialogue with his surrounding communities constantly produces such innovative works, this presents an opportunity for Guernsey to be at the epicentre of an explosive new direction in contemporary art. Cai Guo-Qiang has lit the fuse; don’t miss out on the fireworks.

Beijing Games: Sketches and Video will be at The Greenhouse until 31st August.