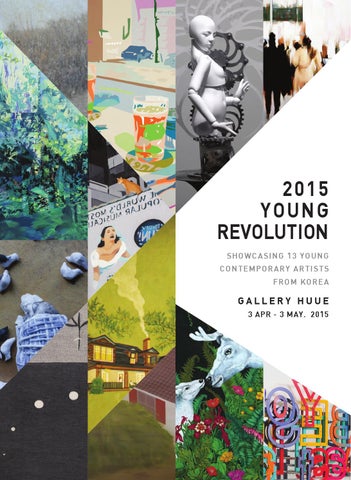 This year’s Young Revolution, an exhibition born out of our ambition to support and foster the growth of young Asian artists, is in its second year. Discovering and cultivating the potentials of young artists is a privilege where we get to focus on their pure desire for creative work and values. Further, in introducing these artists to Singapore art scene, we enrich the newly forming hub for art in South East Asia, while this exhibition serves as more than just another art event but an important launch-pad to international career

for these talented artists.

artists at the Ion gallery in Orchard. This year, we continue this exciting series with works

Young Revolution started in 2014 with an objective to discover young artists between 25 to 35 years old and introduce them to international markets. Last year, we showcased the works of 19 Korean of 13 new Korean artists, this time in Gallery HUUE’s new space in Newton. The perspective of these youthful and fresh artists is extraordinary. These artists put conventional objects in completely unexpected areas or create unlikely combinations of situations, surroundings, and space. By looking deeper into the mundane details of daily life with unusual curiosity, and filtering their findings with his/her beliefs, they are able to re-tell stories with unique twists. Their thinking is not plain. As a person, these artists may come across as pleasant, lighthearted and often pure, but maybe because of this, their art come across as more intense and surprising. Innocent as they may seem, these artists are bold and innovative revolutionist. They bring out the uneasy hidden truths of the society, and they also revolt against the modern civilization for impairing human’s relationships with mother nature. Our selection of artists does not merely aim to celebrate the uniqueness of the young, we chose artists who are solemn and firm in their creative

work. In every piece, artists seek to explore their own ground within the bustling Korean contemporary art marketplace, overflowing with activities, products and ideas. The Singapore art market is not immense, but its developments are powerful and noteworthy. It holds the potential and the appeal to attract talented artists from everywhere. These young artists from Korea will once again pose the question to the art community in Singapore: “Where is the art going today?” “What message do we want to convey to the world as representatives of the young artists from Korea and from Asia?” “How do we want to challenge society with the message of our art?”

We are hopeful that this second Young revolution exhibition will draw in even more visitors given the large turnout last year which reflected how cutting edge these artists are. More importantly, we hope this exhibition will evolve to showcase young artists from all over Asia in the near future.

A Specialist in Contemporary Korean Art & Craft Gallery HUUE, based in Singapore, first opened its doors under the name Art On gallery in 2014. We specialize in Korean art and crafts and provide total art consulting services from space analysis, art selection, installation and after services. We are proud our strong reputation we’ve built amongst our clients for providing friendly and tailored services. Our work does not at stop at merely displaying and selling artworks. We constantly challenge ourselves and the art community by introducing talented artist through various exhibitions and projects who are evolving the world of Korean art and the bigger art community with state-of-the-art deviations. Our newly opened space in Newton will host these exhibitions on a more frequent basis going forward. Our ambition is to establish our name in Singapore and, furthermore in the Asian art community, by the continuous discovering and nurturing talented artists from Korea and beyond. In Korean, the word “휴 Huue” holds an artistic value of being in a restful and meditative state. We want our gallery to be a place where visitors can experience the meaning of the word “Huue” by escaping the busy world to retreat into a relaxed atmosphere dedicated to art, tranquility and beauty. Our mission is to bring the magic of art to everyday spaces and enrich people’s lives. Our new gallery space is a not a typical cold white-cube gallery, but warm area divided into two levels of harmonious space with an accumulation of fine art and crafts around every corner, it offers visitors a relaxed atmosphere where one can truly feel at ease as they enjoy the collections.

3 APR - 3 MAY 2015 Gallery HUUE Singapore Gallery Opening Hours. Tuesday to Friday 10am - 7pm. Saturday and Sunday 10am - 5pm Closed on Mondays and public holidays (by appointment only) Presented by Gallery HUUE

Published by I Gallery HUUE

â&#x201C;&#x2019; Copyright concerning the Exhibition leaflet belongs to Gallery HUUE. No part of this book may be reproduced or transmitted without written permission from the publisher.