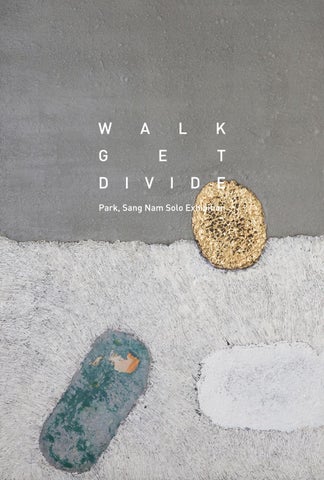 ⓒ Copyright concerning the Exhibition leaflet belongs to Art On Gallery. No Part of this book may be reproduced or transmitted without written permission from the publisher.

Director’s Note Artworks of Sang Nam Park express roads of city dwellers through duplex screens involving both abstract and figuration. His work can be categorized as an abstract painting in that the work simply lists crude elements of dot, line, and plane, but also as a figurative painting in that it actively tries to reveal a specific subject and the stories relating to the subject. The subject that the artist is actively pursuing to reveal is something that is too common in the city for proper attention: road. Through cracks and scratches naturally formed in asphalt road with passage of time, the artist intends to tell a story of an individual or city people in general about their lives, symbolized by traces on the road. As such, the artist, through his image of road, a subject devoid of any emotional color, induces us to observe and think about our lives that are prone to leave us with only empty shells and provides us with an opportunity to explore our pretenses and discover the true authentic life. He uses substances such as cement that possess sense of weight as a coating for his paintings and expresses water puddle, gum stain, scar, and footmark by sticking various other materials on the coating after long hours of grinding. Through such process, he shows various traces symbolizing passage of time. Just like a new perspective bestowed upon an object can turn something plain into distinct. Sang Nam Park’s simple-looking but deep-meaning paintings, with special angle given to the road as a reflection of people’s lives and passage of time, lead us to the world of contemplation.