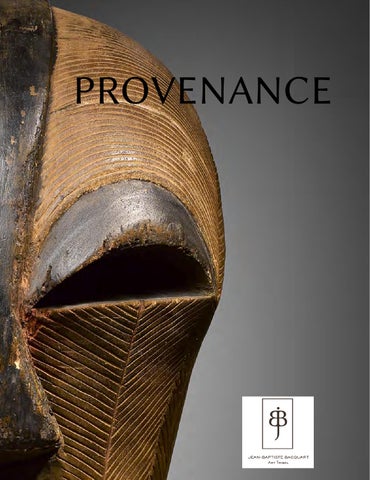 In memory of Priscilla B-L , whose energy filled our lives.

Tribal objects are unique in experiencing two lives. Their first life was lived in their country of origin where these compelling objects were revered, cherished and eventually passed on from generation to generation. Their second life followed their collection and transfer to the West. Here too, they live as cherished objects, but in different ways. Ma jor collectors, modest enthusiasts and museum curators alike are enthralled by the aesthetic qualities, rarity and investment value of these captivating tribal pieces. Inspired by the â&amp;#x20AC;&amp;#x2DC;double lifeâ&amp;#x20AC;&amp;#x2122; of tribal objects I have themed my first exhibition at TEFAF around this concept. The objects presented in this catalogue experienced and survived a rich past in their country of origin. The splendid patina found on many of these pieces attest to their revered usage. Whilst life in the West has been no less notable and illustrious. These glorious tribal objects have formed the basis of prestigious private collections, seminal museum exhibitions and scholarly reference works. Aesthetically diverse, the pieces in this catalogue range from the distinctly abstract evident in the Songe Kifwebe mask (p. 13) to the familiar, realistic shapes seen in the Tchokwe Pwo mask (p. 18) and the Igbo figure from the Kerchache collection (p. 6). What they all share in common is extraordinary quality, illustrious provenance and lives lived on two worlds.

Masks of the Jubwan/Chubwan style belong to a very small group originating from the southern region of Pentecost Island. Whilst their use is little documented, it is beleived that they play an important role in rituals linking men and the Yam tubers. (Huffman in Vanuatu Oceanie; Arts des iles de cendre et de corail, 1996, p. 23) The deep dark patina, the slightly encrusted surface, the marks from stone tools, and the collecting history, all attest to the great age of this striking mask.

2- An Important Baga Altar Figure, A-tshol, Guinea Bissau Circa 1890 Height : 55 cm. Provenance : Pierre Dartevelle,Brussels Private Belgium collection Published/Exhibited : Ututombo, l’Art d’ Afrique Noire dans les collections privée belge, 1988, p.74 et 270, n° VI This extraordinarly striking altar figure is indeed one of a masterwork of Baga art. Its striking elongated beak and openwork head create a tense opposition to the rounded base of the figure. It was set on the ancestor’s altar and its function was to protect the community from deseases, bad crops and other calamities. After the main harvest, the elder would present seeds as an offering to the figure .

This astonishing Dan mask is the creation of a master carver of the 19th Century. Its remarkable repeating lines, strong features and amazing patina clearly set this mask apart from the usual artistic production of Dan carvers. Dan Kran masks usually have triangular pierced eyes, the present example with its large downcast upper lid, is more reminiscent of the oldest Dan Masks from the Ivory coast.

This exquisitely carved mask displays powerfully sensitive features such as the upturned nose and the oblique eyes which represent a young Dan woman. It is the most expressive Dan Mano mask recorded.

5 -A Fine Pair of Baule Figures, Blolo Bla Ivory Coast Circa 1890 Height : 39 cm Provenance : Collection Robert Jacobsen, Denmark Jean-Paul et Michèle Agogué, Paris Baule figures were mostly used for two purposes : the first was to incarnate a spirit of the bush, Asie Usu, The second was to represent a spouse from the other world, Blolo Bla or

These two figures are probalby Blolo Bla. They were carved under the direction of the village diviner and kept in the owner’s room where they were offered food. Moreover, they were rubbed on the owner’s skin, giving them a shiny patina. It is rare to find a pair of Blolo Bla as they were usually dispersed or sold separatly at the death of their owner.

This type of mask was used by the Senufo people during ceremonies of the Poro society, usually associated with burials and collective festivities. They dispay a typical heart shaped face surrounded by ‘wings’. Surmounted by a figure of a stylised hornbill bird, this present example is more precisely associated with Kulébélé, a sub-group of the Poro soceity which includes sculptors and casters. This mask is remarkable for the simplicity of its form and the curvature of its face.

Bambara people use four different types of masks. This one used by the members of the N’tomo society, has a typical vertical structure above its face, The present example is exceptional due to its strong geometric features and the inset of metal plaques (now lost). Its rich dark brown patina attests to a long usage.

Igbo people represent their ancestors by carving large wooden sculptures with typical facial and abdominal scarifications. During annual festivities, these figures are taken out from special houses where they are revered, and are paraded through villages, bringing favourable crops and luck. The present sculpture departs from the usual iconography of Igbo figures which are characteristically represented standing with hand splayed. Here, the ancestor is represented seating, holding an animal, probably its clanâ&amp;#x20AC;&amp;#x2122;s symbol.

Music plays an important role in the royal ceremonies of the Zande people who live in northeastern Zaire. Most of the music is expressed through the use of drums and of five-string angled harps. The later has an antelope skin covered sound box. The court orchestraâ&amp;#x20AC;&amp;#x2122;s repertoire would consist of songs celebrating the history of the kingdom, the kingâ&amp;#x20AC;&amp;#x2122;s personal charisma, and the strength of his army.

Fetish figures were revered throughout the Kongo Kingdom. They were ‘carriers’ of a variety of magical substances called Nkissi. These could be roots, leaves, seeds or animal parts. They were spectacularly placed on the head or in the abdomen of the figures.

Nkissi figures are manipulated by their owners in order to please different spirits and forces who are believed to regulate the world. The posture of the present figure indicates the absolute authority of the king, the one who decides and judges. For a related miniature figure with the same facial expression, see Sotheby’s New York, 15 Nov 2002, lot 79

12- An Exceptional Songye Figure, Democratic Republic of Congo, Kalebwe Style Area Circa 1880 Height : 16.3 cm. without the horn Provenance : Pierre Dartevelle, Brussels Private Belgium collection since 1985 Songye protective figures, Nikshi, take their power from the fetish material, called bishimba, which is inserted into their heads and abdomen. Eternal paraphernalia such a hair and cowrie shells, and leopard, monkey and snakeskins reinforce their power. They infuse the fetish with the key characteristics of the material they are derived from. The exceptionally numerous turret-headed copper nails, elengyela, which cover the head of the figure may record consultations with the Nkishi while at the same time aesthetically enhances the figure. Because of its diminutive size, the present figure would have been used as a personal guardian figure. Most likely preserving a womenâ&amp;#x20AC;&amp;#x2122;s fertility, this type of fetish also protected against malevolent sorcerers, guarded the ownerâ&amp;#x20AC;&amp;#x2122;s home against lightning and ensured good harvests. For a related figure from the Robert Rubin Collection of almost exactly the same size and with the same exceptional covering of copper nails, see Sothebyâ&amp;#x20AC;&amp;#x2122;s New York, 15 April 2011, lot 49

The most famous Songye masks are worn in connection with the Bwadi Bwa Kifwebe secret society. They are called Kifwebe, which means ‘mask’ in the Songye language. Typically their faces are covered with linear incisions and show a square mouth. . These masks are worn during initiation, circumcision and funeral ceremonies when a dancer will display aggressive and uncontrolled behaviour. The present mask is part of an extremely rare group of three masks of the oldest age. All are characterised by an extraordinary quality of the striations, large pierced protrouding mouth and beautifully shaped eyes. It regroups masks published in Hersask, D., Songye: Masks and Figure Sculpture, 1986, plate 68 (now in the british Museum); Bassani, E., Africa, capolavori di un continente, 2003, N.119 and Dapper, «Luba», 1994, p. 203

Iowa City, The University of Iowa Museum of Art, “Kilengi: African Art from the Bareiss Family Collection”, March 27 - May 23, 1999; then other locations in the USA and Germany.

Large fetish figures, called Nkissi, protect entire villages from curses, diseases and bad crops. They are kept in special miniature huts and are mostly handled during the new phase of the moon. The sculpture is a mere support for the fetish material which is inserted in the abdomen, soulders and top of the skull in cavities which are usually linked. Stylistically this figure is part of the group identified by C. Roy as carved by the “Master of Beneki”, a carver strongly influenced by the Nsapo Nsapo tribe, active in the second half of the 19th Century. He is also noted as the creator of famous neckrests with enlarged feet.

15-A magnificent Luba Post, Pungwe, Workshop of the «between Luvua and Lukuga rivers» Democratic Republic of Congo Circa 1880 Height : 85 cm. Provenance :

Published/Exhibited: “Luba”, Dapper Museum, 1994, p. 161 Pungwe posts are anhropomorphic stakes which are planted in the middle of Luba and Hemba villages in front of the house of the clan’s chief. They have apotropaic functions, protecting the village and its inhabitants from diseases, bad crops and occult forces. They are related to the cult of the founding ancestor of the clan. At their base would rest a set of four to seven stones taken from the mountain where the clan ancestor lived before settling in the village. This exceptional post has an unusually large head, giving the figure great power, enhanced by its weathered patina.

The present figure belongs to a very small group of Luba Fetish sculptures used for apotropaic reasons. They protected a whole family or a clan against diseases, curses, bad crops or unsuccessful hunting expeditions. The top of this figure has been hollowed out, filled with magical materials including teeth and other substances, giving it its magical power. It was revered and “activated” by the regular application of palm oil giving the sculpture a wonderful rich oily patina.

Luba people are famed for adorning some of their most important objects with human forms. This beautiful Luba bellows is covered by a thick encrusted patina which suggests long usage. The equilibrium betzeen the size of the bellows and the head, the thick patina and nailed metal plates, all contribute to this particular example being the most important in the corpus of its kind.

19- A Northern Nâ&amp;#x20AC;&amp;#x2122;guni Figure, South of Africa/Mozambique Circa 1900 Height : 64,5 cm. Provenance : Collection Allan Stone, New York This strong sculpture is part of a small group of initiation figures from the Northern Nguni people. They all measure about 80 cm. and display a frontal position with hands resting along the torso. They were used during initiation ceremonies organised for Nguni young men. The present example, with it aged patina and abstract features, epitomizes the best of Nguni artistic production.