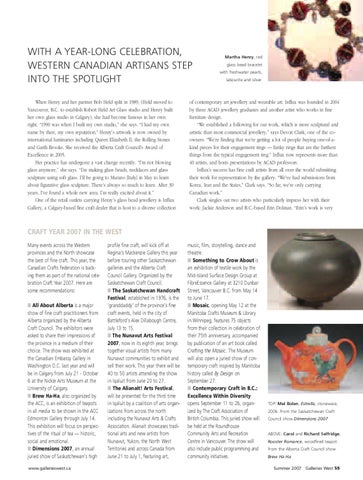 WITH A YEAR-LONG CELEBRATION, WESTERN CANADIAN ARTISANS STEP INTO THE SPOTLIGHT When Henry and her partner Bob Held split in 1989, (Held moved to Vancouver, B.C. to establish Robert Held Art Glass studio and Henry built her own glass studio in Calgary), she had become famous in her own right. “1990 was when I built my own studio,” she says. “I had my own name by then, my own reputation.” Henry’s artwork is now owned by international luminaries including Queen Elizabeth II, the Rolling Stones and Garth Brooks. She received the Alberta Craft Council’s Award of Excellence in 2005. Her practice has undergone a vast change recently. “I’m not blowing glass anymore,” she says. “I’m making glass beads, necklaces and glass sculpture using soft glass. I’ll be going to Murano [Italy] in May to learn about figurative glass sculpture. There’s always so much to learn. After 30 years, I’ve found a whole new area. I’m really excited about it.” One of the retail outlets carrying Henry’s glass bead jewellery is Influx Gallery, a Calgary-based fine craft dealer that is host to a diverse collection

of contemporary art jewellery and wearable art. Influx was founded in 2004 by three ACAD jewellery graduates and another artist who works in fine furniture design. “We established a following for our work, which is more sculptural and artistic than most commercial jewellery,” says Devon Clark, one of the coowners. “We’re finding that we’re getting a lot of people buying one-of-akind pieces for their engagement rings — funky rings that are the furthest things from the typical engagement ring.” Influx now represents more than 40 artists, and hosts presentations by ACAD professors. Influx’s success has fine craft artists from all over the world submitting their work for representation by the gallery. “We’ve had submissions from Korea, Iran and the States,” Clark says. “So far, we’re only carrying Canadian work.” Clark singles out two artists who particularly impress her with their work: Jackie Anderson and B.C.-based Erin Dolman. “Erin’s work is very

CRAFT YEAR 2007 IN THE WEST Many events across the Western provinces and the North showcase the best of fine craft. This year, the Canadian Crafts Federation is backing them as part of the national celebration Craft Year 2007. Here are some recommendations: ■ All About Alberta is a major show of fine craft practitioners from Alberta organized by the Alberta Craft Council. The exhibitors were asked to share their impressions of the province in a medium of their choice. The show was exhibited at the Canadian Embassy Gallery in Washington D.C. last year and will be in Calgary from July 21 - October 6 at the Nickle Arts Museum at the University of Calgary. ■ Brew Ha-Ha, also organized by the ACC, is an exhibition of teapots in all media to be shown in the ACC Edmonton Gallery through July 14. This exhibition will focus on perspectives of the ritual of tea — historic, social and emotional. ■ Dimensions 2007, an annual juried show of Saskatchewan’s high www.gallerieswest.ca

profile fine craft, will kick off at Regina’s Mackenzie Gallery this year before touring other Saskatchewan galleries and the Alberta Craft Council Gallery. Organized by the Saskatchewan Craft Council. ■ The Saskatchewan Handcraft Festival, established in 1976, is the ‘granddaddy’ of the province’s fine craft events, held in the city of Battleford’s Alex Dillabough Centre, July 13 to 15. ■ The Nunavut Arts Festival 2007, now in its eighth year, brings together visual artists from many Nunavut communities to exhibit and sell their work. This year there will be 40 to 50 artists attending the show in Iqaluit from June 20 to 27. ■ The Alianait! Arts Festival, will be presented for the third time in Iqaluit by a coalition of arts organizations from across the north including the Nunavut Arts &amp; Crafts Association. Alianait showcases traditional arts and new artists from Nunavut, Yukon, the North West Territories and across Canada from June 21 to July 1, featuring art,

music, film, storytelling, dance and theatre. ■ Something to Crow About is an exhibition of textile work by the Mid-Island Surface Design Group at FibreEssence Gallery at 3210 Dunbar Street, Vancouver B.C. from May 14 to June 17. ■ Mosaic, opening May 12 at the Manitoba Crafts Museum &amp; Library in Winnipeg, features 75 objects from their collection in celebration of their 75th anniversary, accompanied by publication of an art book called Crafting the Mosaic. The Museum will also open a juried show of contemporary craft inspired by Manitoba history called By Design on September 27. ■ Contemporary Craft in B.C.: Excellence Within Diversity opens September 11 to 26, organized by The Craft Association of British Columbia. This juried show will be held at the Roundhouse Community Arts and Recreation Centre in Vancouver. The show will also include public programming and community initiatives.