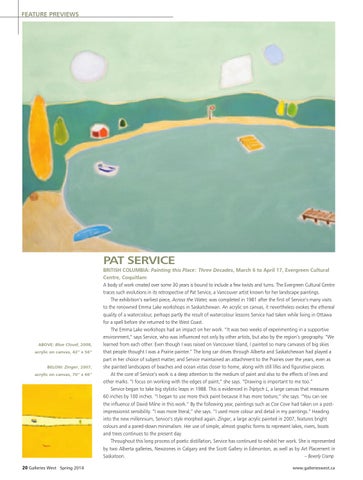 A body of work created over some 30 years is bound to include a few twists and turns. The Evergreen Cultural Centre traces such evolutions in its retrospective of Pat Service, a Vancouver artist known for her landscape paintings. The exhibition’s earliest piece, Across the Water, was completed in 1981 after the first of Service’s many visits to the renowned Emma Lake workshops in Saskatchewan. An acrylic on canvas, it nevertheless evokes the ethereal quality of a watercolour, perhaps partly the result of watercolour lessons Service had taken while living in Ottawa for a spell before she returned to the West Coast. The Emma Lake workshops had an impact on her work. “It was two weeks of experimenting in a supportive environment,” says Service, who was influenced not only by other artists, but also by the region’s geography. “We learned from each other. Even though I was raised on Vancouver Island, I painted so many canvases of big skies that people thought I was a Prairie painter.” The long car drives through Alberta and Saskatchewan had played a part in her choice of subject matter, and Service maintained an attachment to the Prairies over the years, even as she painted landscapes of beaches and ocean vistas closer to home, along with still lifes and figurative pieces. At the core of Service’s work is a deep attention to the medium of paint and also to the effects of lines and other marks. “I focus on working with the edges of paint,” she says. “Drawing is important to me too.” Service began to take big stylistic leaps in 1988. This is evidenced in Triptych L, a large canvas that measures 60 inches by 100 inches. “I began to use more thick paint because it has more texture,” she says. “You can see the influence of David Milne in this work.” By the following year, paintings such as Cox Cove had taken on a postimpressionist sensibility. “I was more literal,” she says. “I used more colour and detail in my paintings.” Heading into the new millennium, Service’s style morphed again. Zinger, a large acrylic painted in 2007, features bright colours and a pared-down minimalism. Her use of simple, almost graphic forms to represent lakes, rivers, boats and trees continues to the present day. Throughout this long process of poetic distillation, Service has continued to exhibit her work. She is represented by two Alberta galleries, Newzones in Calgary and the Scott Gallery in Edmonton, as well as by Art Placement in Saskatoon. – Beverly Cramp www.gallerieswest.ca