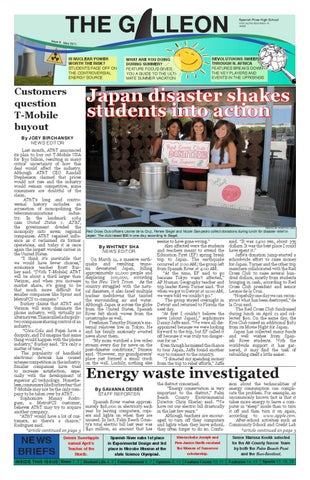 IS NUCLEAR POWER WORTH THE RISK? STUDENTS FACE OFF ON THE CONTROVERSIAL ENERGY SOURCE

REVOLUTUIONS SWEEP THROUGH N. AFRICA FEATURES BREAKS DOWN THE KEY PLAYERS AND EVENTS IN THE UPRISINGS

WHAT ARE YOU DOING DURING SUMMER? FEATURE FOCUS GIVES YOU A GUIDE TO THE ULTIMATE SUMMER VACATION

By JOEY BIRCHANSKY NEWS EDITOR Last month, AT&amp;T announced its plan to buy out T-Mobile USA for $39 billion, resulting in many critics’ uncertainty of how this deal would affect the industry. Although AT&amp;T CEO Randall Stephenson claimed that prices would not rise and the industry would remain competitive, some consumers are doubtful of the claim. AT&amp;T’s long and controversial history includes an accusation of monopolizing the telecommunications industry. In the landmark 1984 case United States v. AT&amp;T, the government divided the monopoly into seven regional companies. AT&amp;T regained influence as it reclaimed its former operations, and today it is once again the largest wireless carrier in the United States. “I think it’s inevitable that we would have fewer choices,” economics teacher Brett Burkey said. “[With T-Mobile] AT&amp;T will be about a third larger than Verizon, and when you increase market share, it’s going to be that much more difficult for smaller companies like Sprint and MetroPCS to compete.” Burkey claims that AT&amp;T and Verizon will soon dominate the phone industry, with virtually no alternatives. This is called a duopoly two companies sharing control of an industry. “Coca-Cola and Pepsi have a duopoly, and I’d imagine that same thing would happen with the phone industry,” Burkey said. “It’s only a matter of time.” The popularity of handheld electronic devices has caused intense competition in the industry. Smaller companies have tried to increase satisfaction, especially with the development of superior 4G technology. Nonetheless, consumers like Burkey fear that T-Mobile may not be the only company to be taken over by AT&amp;T. Sophomore Manny Rodriguez, a MetroPCS customer, believes AT&amp;T may try to acquire another company. “AT&amp;T would have a lot of customers, so there’s a chance,” Rodriguez said. *article continued on page 3

By WHITNEY SHA NEWS EDITOR On March 11, a massive earthquake and resulting tsunami devastated Japan, killing approximately 12,000 people and displacing 200,000, according to the New York Times. As the country struggled with the natural disasters, it also faced multiple nuclear meltdowns that tainted the surrounding air and water. Although Japan is across the globe from the United States, Spanish River felt shock waves from the catastrophe as well. Freshman Timothy Stinson’s maternal relatives live in Tokyo. He and his family anxiously awaited news about them. “My mom watched a live video stream every day for news on the post-disaster conditions,” Stinson said. “However, my grandparents’ place just formed a small crack on the wall. Luckily, nothing else

seems to have gone wrong.” Also affected were the students and teachers meant to attend the Education First (EF) spring break trip to Japan. The earthquake occurred at 2:00 AM; the group left from Spanish River at 4:00 AM. “At the time, EF said to go because Tokyo wasn’t affected,” AP Human Geography teacher and trip leader Kevin Turner said. “But when we got to Detroit at 11:00 AM, we were told we couldn’t go.” The group stayed overnight in Detroit and returned to Florida the next day. “At first I couldn’t believe the news [about Japan],” sophomore Danny Jaffe said. “We were all disappointed because we were looking forward to the trip, but EF called it off because it was truly too dangerous for us.” Even though he missed the chance to tour Japan, Jaffe found another way to connect to the country. “I donated my spending money from the trip to relief efforts,” Jaffe

said. “It was 2400 yen, about 375 dollars. It was the best place I could have spent it.” Jaffe’s donation jump-started a schoolwide effort to raise money for Japan. Turner and the other trip members collaborated with the Red Cross Club to raise several hundred dollars, mostly from students bringing in cash, according to Red Cross Club president and senior Leonie de la Cruz. “Hopefully one day we can reconstruct what has been destroyed,” de la Cruz said. The Red Cross Club fundraised during lunch on April 21 and collected $96. On the same day, the Kiva Club raised an additional $182 from its Movie Night for Japan. Japan has collected many funds and well wishes from Spanish River students. With the worldwide support it has garnered, it may find the task of rebuilding itself a little easier.

the district concerned. “Energy conservation is very important to the district,” Palm Beach County Environmental Director Chris Skerlec said. “We have cut our electric bill drastically in the last few years.” Although teachers are encouraged to turn off their computers and lights when they leave school, they often forget to do so. Confu-

sion about the technicalities of energy consumption can complicate the problem. For example, an uncommonly known fact is that it takes more energy to leave a computer in “sleep” mode than to turn it off and then turn it on again, according to www.apple.com. After-school activities such as Community School and Credit Lab *article continued on page 3

Spanish River wastes approximately $18,000 in electricity each year by leaving computers, copiers and lights on when they are unused. In fact, Palm Beach County’s total electric bill last year was $40 million, an amount that has

Senior Marissa Koolik selected for the All-County Soccer Team by both the Palm Beach Post and the Sun-Sentinel. Features 14, 15

IS NUCLEAR POWER WORTH THE RISK? STUDENTS FACE OFF ON THE CONTROVERSIAL ENERGY SOURCE REVOLUTUIONS SWEEP THROUGH N. AFRICA FEATURES BREAKS DOWN THE KEY PLAYERS AND EVENTS IN THE UPRISINGS WHAT ARE YOU DOING DURING SUMMER? FEATURE FOCUS GIVES YOU A GUIDE TO THE ULTI- MATE SUMMER VACATION Manoucheka Joseph and Piea-Janice Smith received the Women of Tomorrow scholarship. Senior Marissa Koolik selected for the All-County Soccer Team by both the Palm Beach Post and the Sun-Sentinel. 33496