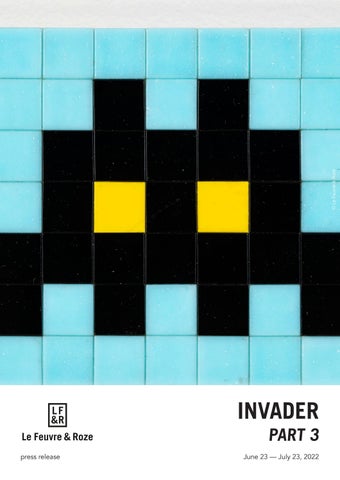 Franck Le Feuvre and Jonathan Roze present Invader: Part 3, the third chapter in a series of exhibitions, initiated in 2011, devoted to Invader. The gallery, which represented the artist in France between 2009 and 2015, first co-organized, alongside Invader, the exhibition 1000 in 2011. Celebrating Invader’s 1000th mosaic pasted in the streets of Paris, the exhibition was held both at La Générale - where the Rubik’s Cubes as well as several installations could be seen - as well as at the gallery where the Alias occupied the space. In 2017, after the official collaboration between the artist and the gallery had already ended, the gallery organized Invader: Masterpieces following the discovery of four never-seen-before ceramics from 1997. These mosaics, among Invader’s earliest works, formed the backbone of an exhibition featuring a selection of the artist’s major works. Although Invader was not directly involved in the exhibition, the gallery was able to rely on his intervention for the restoration of the four mosaics from 1997, which, at the time of their discovery, had just spent twenty years outside. Five years after Invader: Masterpieces, the gallery is pleased to present Invader: Part 3, an exhibition unveiling a series of symbolic works, representative of the artist’s work: Rubik’s cubes, Alias, unique pieces, Invader Guides with micro-ceramics, Invader Kits...

A catalog is published on this occasion. As a preface to this one, Franck Le Feuvre signs a text narrating his meeting and his history with the artist (also to be read below).

My first encounter with Invader took place at the gallery in early 2009. For several months, I had been sending “subliminal” messages to the artist through intermediaries: how much I admired his work, his concept, how much I regretted that he had no representation in France... At the time, collectors and fans of his work had to go through Steve Lazarides in London or Jonathan LeVine in New York. I remember that first meeting well. I was deep in conversation with JonOne and Ikon, his assistant, when a scooter covered in stickers slowed down in front of the window and stopped. Invader stepped forward, helmet still on and Ray Bans perched on his nose. He stood there looking in the window. I had never met him, but I could immediately guess who he was. JonOne, with his trademark accent, exclaimed: “Invader!!” “I was passing this way,” he said. A big thank you to John for the very kind words he said about me back then. A year earlier, we devoted an exhibition to John entitled “My Father’s Keeper”, which was a milestone in bringing urban art into more contemporary collections. At the time, urban art was transgressive and avant-garde. Only five or six very specialised galleries presented it in Paris. My gallery had only been in existence for a short time and—not being from the art world—I quickly realised that I would not be able to break into that world in the traditional way. As an outsider myself, I had a good understanding of the needs of outsiders, which urban artists still were at the time. They were looking for new collectors and I sensed that the public in Paris’ eighth arrondissement was intrigued and receptive to that new scene. At the same time, urban art was becoming trendy in France, the UK, and on the East and West coasts of the United States. We soon became successful. To get back to my first meeting with Invader: we chatted for a while, then he left without making any promises. He would be back, maybe. In fact, a few weeks later he did come to see me again. We had several further meetings before he entrusted me with some of his works for the first time. He does not commit himself lightly, he is aware that he is an important artist.

As time went on and we made sales, we developed a good relationship and decided to make our partnership official. We started to talk about projects, personal exhibitions... I immediately grasped the intelligence of the work, the genius of the concept of planetary invasion, the quality of his pieces. All in pixel form. While he has long since moved beyond urban art, Invader is certainly the artist most likely to reach new heights in the Metaverse. A new invasion... We started to talk about a personal exhibition. That was in 2010. The exhibition took place one year later. His previous event in Paris had been way back in 2005. And so there was a need to make a big splash with Invader’s grand return to the French capital.

1000. The idea was to celebrate Invader’s 1000th work on the walls of Paris. After considering various institutional venues, the building he finally chose was “La Générale”. “La Générale” is a former EDF power plant located on Avenue Parmentier in the 11th arrondissement. It was later converted into a space to host events. It is run by an artistic association. It is an immense hall with a ceiling roughly ten metres high. The City of Paris rents out the space. It was up to us to pay the many members of the association for their contribution before and during the exhibition. Invader had to pony up, since putting on a production on that scale was beyond my means. 7 June 2011. On the evening of the opening, the temperature was ideal. Avenue Parmentier was closed off to traffic. The eight security guards were struggling to contain the crowd at the entrance, waiting for the opening. There were thousands of people in a queue 200 metres long. Impressive! At the same time, far from the tumult, Invader and his assistant were setting up the aliases for the exhibition and some Rubik’s Cubes in the gallery on rue du Faubourg Saint Honoré. As far as I know, to this day no other exhibition in Paris—excluding institutions—has drawn a bigger crowd. Its success confirmed Invader’s immense popularity with a public that were often not regular visitors to galleries. Invader then reaped the rewards of a titanic undertaking that he began in 1998 and has continued ever since with unwavering consistency and ever-renewed creativity. Right on target.

And the audience turned up. They came to see the ceramic and glass mosaics that Invader had made his own and, while they were there, they discovered Rubikcubism, which the artist invented in 2005. Invader’s work, although prolific in the streets of the dozens of cities he has invaded, has never been plentiful in galleries. That remains the artist’s choice to this day. His exhibitions are rare. His most recent European one took place in 2012 at the Alice Gallery in Brussels. In 2014, one of our collectors told me about a crazy Urban Art project for one of his restaurants in Hong Kong. The leading figures of the movement were getting involved in that project. Major works, including some by Basquiat, would be presented. Seven artists from the gallery were taking part in the adventure. It took me six months to persuade Invader to make the trip. But then he got on so famously with our host that in 2015 a gallery and foundation was established in Hong Kong, with Invader as its cornerstone. It was a turning point and a springboard for Invader. His continued growth now required means that I did not have, and his works in galleries were becoming increasingly rare. We ended our collaboration in late 2015 by mutual agreement. But ever since, our enthusiasm has remained intact. While we no longer represent him in France, we have retained a certain legitimacy, and our collectors — through purchases or sales of second-market works — let us continue to breathe life into the whole beautiful adventure in a different way. As such, the gallery produced “Invader Masterpieces” in 2017. At the heart of the exhibition are four exceptional mosaics from his earliest work (1997). Invader Part III is the third opus made up of a series of works, some remark able and all representative of his art. We thank the collectors who have lent us their pieces for their trust and friendship. Presented here are: Rubikcubism, Unique Pieces, Alias, Invasion Guides, Invasion Kits… Jonathan Roze and I were very pleased to prepare this wonderful event. Franck Le Feuvre May 2022