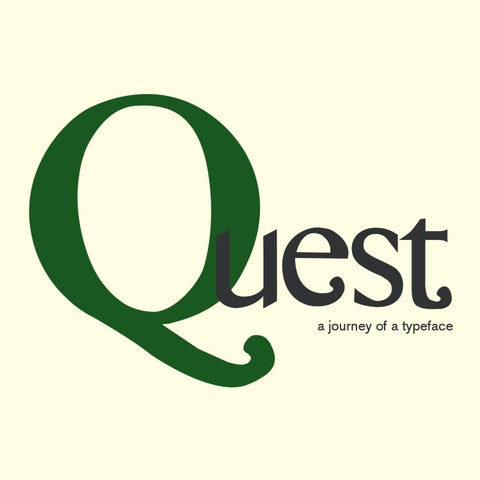 a journey of a typeface

hen given the challenge to design a typeface from scratch, a designer should consider many different factors in that play into creating the ﬁnal product: whether to do a serif or not, what the stroke weights should be like, what the target audience is, etc. This young designer, however, had one thought in mind: what is the coolest possible thing that he could do? That strong desire, coupled with everlasting love of the works of J.R.R. Tolkien, the beginning ideas for a new typeface came. Thus began a great journey that resulted in the display type, Quest. With a basis in the transitional serif Plantin and bits of ﬂare from the elvish alphabet Tengwar (taken straight from Tolkien’s folklore), Quest has the feeling of the elvish script without the cumbersome look of it. The process in creating the typeface was much like a journey of its own. Many emotions went into the project: happiness, sadness, frustration, anxiety, and triumph. The road was long and hard, but always worth it. Then I saw the parallels between the stories of Tolkien and the story I was creating myself. And thus came its name, perfectly blending all those letdowns, breakthroughs, and victories. Just as Frodo was on a quest to destroy the Ring, I was on a quest to create a typeface. And we both succeeded.

this is TtengwAR (translation: this is Tengwar)

This is the elvish script from which the style of Quest is derived. From looking at this character, you can that see the stylistic decisions made in the ﬁnal product. The ascenders of Quest were greatly inﬂuenced by these characters. It uses the slight curves at the top of the ascenders in all letters that share that same type of ascender (h, k, b, d). Also, one can see where a version of the descender here is used in Quest as well. Obviously, the characters with descenders like p and q use it, but also with most miniscules, it has a form of it used. With the “wedge” at the bottom of most characters (see a, f, h, etc.), it brings a sense of unity throughout the whole typeface.

Serifs Because Tengwar is decidedly not serif, something had to be done with the serifs of Plantin without disrupting the overall balance of it. After some struggles, trying several different things, and even taking off the serifs completely, I decided on the ďŹ nal solution. Looking at other celtic, script-like letters and especially LOTR book covers, I found that the designers often brought the serif to either a point or close to it. I knew at that point that this was my solution. It preserves the balance of the base typeface while also preserving the desired look and feeling for each character.

Upon looking at Plantin’s majuscule P, I saw that the curve of it doesn’t connect with the stem. I saw this as a perfect opportunity to employ one of the characteristics of Tengwar. Often, the characters come to a “ball” shape at the end of certain strokes. I thought that “ball” would ﬁt perfectly in that little spot left by the said disconnect in the majscule P of Plantin. This shape now shows up in many of Quest’s characters. Some examples include the ﬁnial of the miniscule e, the tail of the majuscule r, and the terminal of the miniscule y. Either way, miniscule or majuscule, the “ball” became a staple in the anatomy of Quest.

ippin looked out from the shelter of Gandalfâ&#x20AC;&#x2122;s cloak. He wondered if he was awake or still sleeping, still in the swift-moving dream in which he had been wrapped so long since the great ride began. The dark world was rushing by and the wind sang loudly in his ears. He could see nothing but the wheeling stars, and away to his right vast shadows against the sky where the mountains of the South marched past. Sleepily he tried to reckon the times and stages of their journey, but his memory was drowsy and uncertain. There had been the first ride at terrible speed without a halt, and then in the dawn he had seen a pale gleam of gold, and they had come to the silent town and the great empty house on the hill. And hardly had they reached its shelter when the winged shadow had passed over once again, and men wilted with fear. But Gandalf had spoken soft words to him, and he had slept in a corner, tired but uneasy, dimly aware of comings and goings and of men talking and Gandalf giving orders. And then 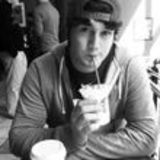 To download Quest, go here! http://www.dafont.com/quest.font. A new typeface named Quest. "With a basis in the transitional serif Plantin...

To download Quest, go here! http://www.dafont.com/quest.font. A new typeface named Quest. "With a basis in the transitional serif Plantin...