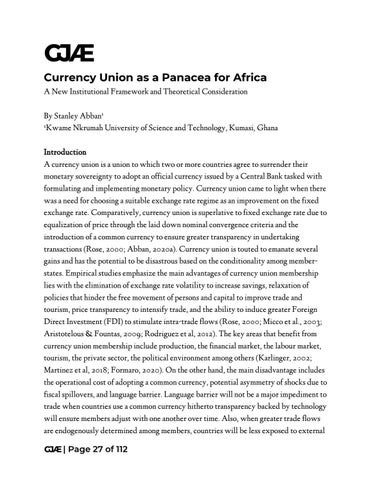 Currency Union as a Panacea for Africa A New Institutional Framework and Theoretical Consideration By Stanley Abban1 1Kwame Nkrumah University of Science and Technology, Kumasi, Ghana Introduction A currency union is a union to which two or more countries agree to surrender their monetary sovereignty to adopt an official currency issued by a Central Bank tasked with formulating and implementing monetary policy. Currency union came to light when there was a need for choosing a suitable exchange rate regime as an improvement on the fixed exchange rate. Comparatively, currency union is superlative to fixed exchange rate due to equalization of price through the laid down nominal convergence criteria and the introduction of a common currency to ensure greater transparency in undertaking transactions (Rose, 2000; Abban, 2020a). Currency union is touted to emanate several gains and has the potential to be disastrous based on the conditionality among memberstates. Empirical studies emphasize the main advantages of currency union membership lies with the elimination of exchange rate volatility to increase savings, relaxation of policies that hinder the free movement of persons and capital to improve trade and tourism, price transparency to intensify trade, and the ability to induce greater Foreign Direct Investment (FDI) to stimulate intra-trade flows (Rose, 2000; Micco et al., 2003; Aristotelous &amp; Fountas, 2009; Rodriguez et al, 2012). The key areas that benefit from currency union membership include production, the financial market, the labour market, tourism, the private sector, the political environment among others (Karlinger, 2002; Martinez et al, 2018; Formaro, 2020). On the other hand, the main disadvantage includes the operational cost of adopting a common currency, potential asymmetry of shocks due to fiscal spillovers, and language barrier. Language barrier will not be a major impediment to trade when countries use a common currency hitherto transparency backed by technology will ensure members adjust with one another over time. Also, when greater trade flows are endogenously determined among members, countries will be less exposed to external

The GAEE Journal for Aspiring Economists (GJAE) is the flagship publication of the Global Association of Economics Education (GAEE), aiming at providing a platform for high-level economics discourse among students in developing countries and marginalized communities through our free-to-publish open-access model. 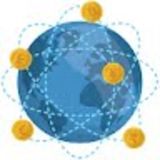