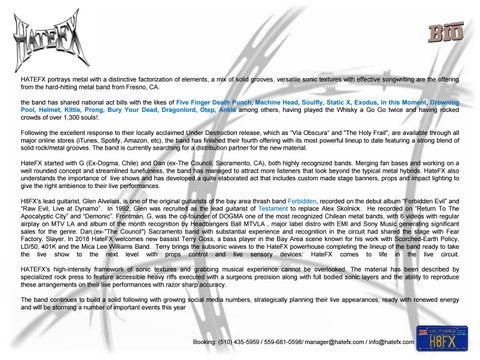 HATEFX portrays metal with a distinctive factorization of elements, a mix of solid grooves, versatile sonic textures with effective songwriting are the offering from the hard-hitting metal band from Fresno, CA. the band has shared national act bills with the likes of Five Finger Death Punch, Machine Head, Soulfly, Static X, Exodus, In this Moment, Drowning Pool, Helmet, Kittie, Prong, Bury Your Dead, Dragonlord, Otep, Ankla among others, having played the Whisky a Go Go twice and having rocked crowds of over 1,300 souls!. Following the excellent response to their locally acclaimed Under Destruction release, which as “Via Obscura“ and "The Holy Frail", are available through all major online stores (iTunes, Spotify, Amazon, etc), the band has finished their fourth offering with its most powerful lineup to date featuring a strong blend of solid rock/metal grooves. The band is currently searching for a distribution partner for the new material. HateFX started with G (Ex-Dogma, Chile) and Dan (ex-The Council, Sacramento, CA), both highly recognized bands. Merging fan bases and working on a well rounded concept and streamlined tunefulness, the band has managed to attract more listeners that look beyond the typical metal hybrids. HateFX also understands the importance of live shows and has developed a quite elaborated act that includes custom made stage banners, props and impact lighting to give the right ambience to their live performances.

H8FX's lead guitarist, Glen Alvelais, is one of the original guitarists of the bay area thrash band Forbidden, recorded on the debut album “Forbidden Evil” and “Raw Evil, Live at Dynamo”. In 1992, Glen was recruited as the lead guitarist of Testament to replace Alex Skolnick. He recorded on “Return To The Apocalyptic City” and “Demonic”. Frontman, G, was the co-founder of DOGMA one of the most recognized Chilean metal bands, with 6 videos with regular airplay on MTV LA and album of the month recognition by Headbangers Ball MTVLA , major label distro with EMI and Sony Music generating significant sales for the genre. Dan,(ex-"The Council") Sacramento band with substantial experience and recognition in the circuit had shared the stage with Fear Factory, Slayer. In 2018 HateFX welcomes new bassist Terry Goss, a bass player in the Bay Area scene known for his work with Scorched-Earth Policy, LD/50, 401K and the Mica Lee Williams Band. Terry brings the subsonic waves to the HateFX powerhouse completing the lineup of the band ready to take the live show to the next level with props control and live sensory devices: HateFX comes to life in the live circuit. HATEFX's high-intensity framework of sonic textures and grabbing musical experience cannot be overlooked. The material has been described by specialized rock press to feature accessible heavy riffs executed with a surgeons precision along with full bodied sonic layers and the ability to reproduce these arrangements on their live performances with razor sharp accuracy. The band continues to build a solid following with growing social media numbers, strategically planning their live appearances, ready with renewed energy and will be storming a number of important events this year 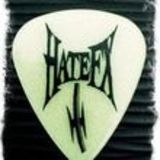