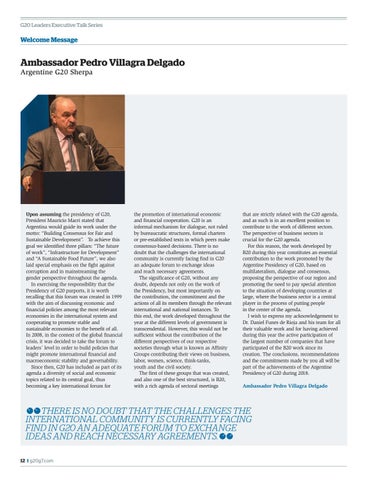 Upon assuming the presidency of G20, President Mauricio Macri stated that Argentina would guide its work under the motto: “Building Consensus for Fair and Sustainable Development”. To achieve this goal we identified three pillars: “The future of work”, “Infrastructure for Development” and “A Sustainable Food Future”, we also laid special emphasis on the fight against corruption and in mainstreaming the gender perspective throughout the agenda. In exercising the responsibility that the Presidency of G20 purports, it is worth recalling that this forum was created in 1999 with the aim of discussing economic and financial policies among the most relevant economies in the international system and cooperating to promote stable and sustainable economies to the benefit of all. In 2008, in the context of the global financial crisis, it was decided to take the forum to leaders´ level in order to build policies that might promote international financial and macroeconomic stability and governability. Since then, G20 has included as part of its agenda a diversity of social and economic topics related to its central goal, thus becoming a key international forum for

the promotion of international economic and financial cooperation. G20 is an informal mechanism for dialogue, not ruled by bureaucratic structures, formal charters or pre-established texts in which peers make consensus-based decisions. There is no doubt that the challenges the international community is currently facing find in G20 an adequate forum to exchange ideas and reach necessary agreements. The significance of G20, without any doubt, depends not only on the work of the Presidency, but most importantly on the contribution, the commitment and the actions of all its members through the relevant international and national instances. To this end, the work developed throughout the year at the different levels of government is transcendental. However, this would not be sufficient without the contribution of the different perspectives of our respective societies through what is known as Affinity Groups contributing their views on business, labor, women, science, think-tanks, youth and the civil society. The first of these groups that was created, and also one of the best structured, is B20, with a rich agenda of sectoral meetings

that are strictly related with the G20 agenda, and as such is in an excellent position to contribute to the work of different sectors. The perspective of business sectors is crucial for the G20 agenda. For this reason, the work developed by B20 during this year constitutes an essential contribution to the work promoted by the Argentine Presidency of G20, based on multilateralism, dialogue and consensus, proposing the perspective of our region and promoting the need to pay special attention to the situation of developing countries at large, where the business sector is a central player in the process of putting people in the center of the agenda. I wish to express my acknowledgement to Dr. Daniel Funes de Rioja and his team for all their valuable work and for having achieved during this year the active participation of the largest number of companies that have participated of the B20 work since its creation. The conclusions, recommendations and the commitments made by you all will be part of the achievements of the Argentine Presidency of G20 during 2018. Ambassador Pedro Villagra Delgado

THERE IS NO DOUBT THAT THE CHALLENGES THE INTERNATIONAL COMMUNITY IS CURRENTLY FACING FIND IN G20 AN ADEQUATE FORUM TO EXCHANGE IDEAS AND REACH NECESSARY AGREEMENTS. 12 ❙ g20g7.com 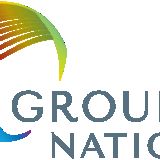 Another depth read on the topics for discussion around the G20 Leaders Summit. The Global Communiqué is for everyone who is interested in gl...

Another depth read on the topics for discussion around the G20 Leaders Summit. The Global Communiqué is for everyone who is interested in gl...