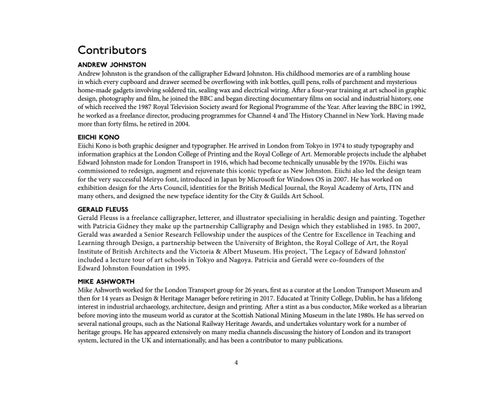 Contributors ANDREW JOHNSTON Andrew Johnston is the grandson of the calligrapher Edward Johnston. His childhood memories are of a rambling house in which every cupboard and drawer seemed be overflowing with ink bottles, quill pens, rolls of parchment and mysterious home-made gadgets involving soldered tin, sealing wax and electrical wiring. After a four-year training at art school in graphic design, photography and film, he joined the BBC and began directing documentary films on social and industrial history, one of which received the 1987 Royal Television Society award for Regional Programme of the Year. After leaving the BBC in 1992, he worked as a freelance director, producing programmes for Channel 4 and The History Channel in New York. Having made more than forty films, he retired in 2004. EIICHI KONO Eiichi Kono is both graphic designer and typographer. He arrived in London from Tokyo in 1974 to study typography and information graphics at the London College of Printing and the Royal College of Art. Memorable projects include the alphabet Edward Johnston made for London Transport in 1916, which had become technically unusable by the 1970s. Eiichi was commissioned to redesign, augment and rejuvenate this iconic typeface as New Johnston. Eiichi also led the design team for the very successful Meiryo font, introduced in Japan by Microsoft for Windows OS in 2007. He has worked on exhibition design for the Arts Council, identities for the British Medical Journal, the Royal Academy of Arts, ITN and many others, and designed the new typeface identity for the City & Guilds Art School. GERALD FLEUSS Gerald Fleuss is a freelance calligrapher, letterer, and illustrator specialising in heraldic design and painting. Together with Patricia Gidney they make up the partnership Calligraphy and Design which they established in 1985. In 2007, Gerald was awarded a Senior Research Fellowship under the auspices of the Centre for Excellence in Teaching and Learning through Design, a partnership between the University of Brighton, the Royal College of Art, the Royal Institute of British Architects and the Victoria & Albert Museum. His project, â&#x20AC;&#x2DC;The Legacy of Edward Johnstonâ&#x20AC;&#x2122; included a lecture tour of art schools in Tokyo and Nagoya. Patricia and Gerald were co-founders of the Edward Johnston Foundation in 1995. MIKE ASHWORTH Mike Ashworth worked for the London Transport group for 26 years, first as a curator at the London Transport Museum and then for 14 years as Design & Heritage Manager before retiring in 2017. Educated at Trinity College, Dublin, he has a lifelong interest in industrial archaeology, architecture, design and printing. After a stint as a bus conductor, Mike worked as a librarian before moving into the museum world as curator at the Scottish National Mining Museum in the late 1980s. He has served on several national groups, such as the National Railway Heritage Awards, and undertakes voluntary work for a number of heritage groups. He has appeared extensively on many media channels discussing the history of London and its transport system, lectured in the UK and internationally, and has been a contributor to many publications. 4