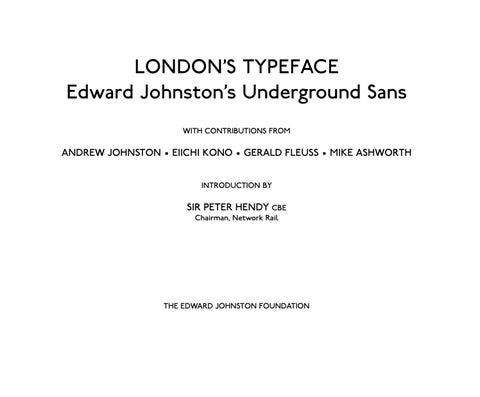 All rights reserved. No part of this publication may be reproduced, stored in a retrieval system or transmitted in any form or by any means, electrical, mechanical or otherwise, without first seeking the permission of the copyright owners and of the publishers. British Library Cataloguing in Publication data A catalogue record for this book is available from the British Library

The Edward Johnston Foundation is dedicated to the promotion of public awareness of calligraphy, not only as an art form in its own right but also as the seed and reference point for many other lettering disciplines including modern typeface design. It is based in Ditchling, East Sussex the former home of Edward Johnston and birthplace of the modern revival of calligraphy.

A Style is Born 9 Andrew Johnston

The Edward Johnston Memorial at Farringdon

Johnston’s Surviving Heritage 45 Mike Ashworth This book was published to mark the unveiling at Farringdon station of the memorial commemorating Edward Johnston’s work and the new Johnston 100 typeface. This took place on 24th June 2019 and Sir Peter Hendy’s Introduction contains the speech he made on that occasion. For their assistance with this publication, the Edward Johnston Foundation would like to thank the London Transport Museum and Transport for London, particularly Customer Experience Manager Gareth Leslie and his team, who organised the installation of this impressive memorial.

Contributors ANDREW JOHNSTON Andrew Johnston is the grandson of the calligrapher Edward Johnston. His childhood memories are of a rambling house in which every cupboard and drawer seemed be overflowing with ink bottles, quill pens, rolls of parchment and mysterious home-made gadgets involving soldered tin, sealing wax and electrical wiring. After a four-year training at art school in graphic design, photography and film, he joined the BBC and began directing documentary films on social and industrial history, one of which received the 1987 Royal Television Society award for Regional Programme of the Year. After leaving the BBC in 1992, he worked as a freelance director, producing programmes for Channel 4 and The History Channel in New York. Having made more than forty films, he retired in 2004. EIICHI KONO Eiichi Kono is both graphic designer and typographer. He arrived in London from Tokyo in 1974 to study typography and information graphics at the London College of Printing and the Royal College of Art. Memorable projects include the alphabet Edward Johnston made for London Transport in 1916, which had become technically unusable by the 1970s. Eiichi was commissioned to redesign, augment and rejuvenate this iconic typeface as New Johnston. Eiichi also led the design team for the very successful Meiryo font, introduced in Japan by Microsoft for Windows OS in 2007. He has worked on exhibition design for the Arts Council, identities for the British Medical Journal, the Royal Academy of Arts, ITN and many others, and designed the new typeface identity for the City &amp; Guilds Art School. GERALD FLEUSS Gerald Fleuss is a freelance calligrapher, letterer, and illustrator specialising in heraldic design and painting. Together with Patricia Gidney they make up the partnership Calligraphy and Design which they established in 1985. In 2007, Gerald was awarded a Senior Research Fellowship under the auspices of the Centre for Excellence in Teaching and Learning through Design, a partnership between the University of Brighton, the Royal College of Art, the Royal Institute of British Architects and the Victoria &amp; Albert Museum. His project, â&amp;#x20AC;&amp;#x2DC;The Legacy of Edward Johnstonâ&amp;#x20AC;&amp;#x2122; included a lecture tour of art schools in Tokyo and Nagoya. Patricia and Gerald were co-founders of the Edward Johnston Foundation in 1995. MIKE ASHWORTH Mike Ashworth worked for the London Transport group for 26 years, first as a curator at the London Transport Museum and then for 14 years as Design &amp; Heritage Manager before retiring in 2017. Educated at Trinity College, Dublin, he has a lifelong interest in industrial archaeology, architecture, design and printing. After a stint as a bus conductor, Mike worked as a librarian before moving into the museum world as curator at the Scottish National Mining Museum in the late 1980s. He has served on several national groups, such as the National Railway Heritage Awards, and undertakes voluntary work for a number of heritage groups. He has appeared extensively on many media channels discussing the history of London and its transport system, lectured in the UK and internationally, and has been a contributor to many publications. 4

t’s taken more than a hundred years for there to be a proper memorial for the Johnston typeface, renowned as the way in which London’s transport speaks to its users, and, indeed, for a long time now, the way that London speaks most easily to the world. Edward Johnston’s commission by Frank Pick to design a new alphabet for posters and publicity was a bold move to raise the profile of the London Underground at a time when the system was struggling financially and needed what today would be called ‘profile’. Johnston’s resultant work was, and is, a masterpiece, and, together with the roundel, gives instant visual recognition to London’s transport and indeed speaks of London whatever words are written in it. Taken together, Johnston and Pick gave a public authority the most visible and recognisable brand in the world. It’s contributed, I think, to the London Transport and now Transport for London organisations being proud of what they do, of how they look, and what they say; and to a sense of belonging that Londoners have and certainly those of us who work or have worked for the organisation are proud of, too. And good design comes naturally when everything you publish has a timeless elegance because of the typeface it’s written in.

their proper colour – red – after I became in charge of them in 2001, I made sure that the numbers and destinations on them have continued to be legibly written in Johnston’s typeface; and, in preparation for the 100th anniversary in 2016, I asked Jon Hunter, TfL’s Design Manager, to create ‘Johnston 100’, Photography by Doug Rose which restores some lovely original features, gives an @ for digital use, and replaces the ‘1’ and ‘4’ of the 1980s rework. Those of you who are really observant might notice those contentious characters never got on the front of buses!

So this memorial – sculpture – whatever it is, is wonderful. It will be a permanent reminder of the creativity of Edward Johnston, and the typeface he designed. I hope it brings to the widest possible audience the importance of fitness for purpose and elegance for public things, which both Johnston and Pick wanted, and which Transport for London and its predecessors have sought to fulfil.

I was sad to leave TfL in 2015, although after nearly ten years as Commissioner it was time to hand over; leading any organisation that size is tough, and Mike Brown does it in harder circumstances than I had to, and does a great job. But I miss it still, and one of the things I miss the most is being able to write my messages in this beautiful typeface. So to be associated again with Johnston is a huge pleasure; and even better is that from now on this display will delight Londoners and remind them of the enduring work of Edward Johnston and the mark he has left on this world city, and the transport system which makes it thrive.

My own role in the story of Johnston’s typeface has been minor, but, I hope, effective. Having restored London’s buses to

A Style is Born ANDREW JOHNSTON

he latest addition to London’s Underground railway network is quite unlike the rest of the system. Originally known as ‘Crossrail’, but re-christened the ‘Elizabeth Line’ in honour of Her Majesty the Queen, this multi-billion-pound project brings fullsize main line trains right through the heart of the City. Farringdon Station marks the point where this new east-west line crosses the older north–south route, known as ‘Thameslink’. It also serves the Circle, Hammersmith and City and Metropolitan lines, and is constantly buzzing with trains and people coming and going. As they hurry about their business, passengers may pause for a moment to wonder why there should be a series of what appear to be huge wooden printing blocks mounted on the station wall. Although not immediately obvious, the blocks represent something familiar to all London’s travellers - the lettering that guides them around the city. On printing blocks, letters are reversed and read from right to left. So at first sight it’s hard to decipher, but it soon becomes obvious that this is an entire lower-case alphabet, writ large and stretching for quite some distance. Tucked discreetly into the middle at the letter ‘j’ (and still reading backwards) is the word ‘johnston’, commemorating the type’s unlikely creator: a calligrapher skilled in the ways of Medieval scribes, yet also able to design a typeface so simple and effective that after more than 100 years, it still looks modern. And that’s something worth celebrating with this striking memorial, for Edward Johnston’s timeless letterforms, combined with the familiar roundel logo that he also perfected, have become symbolic, not just of the Underground, but of London itself. The millions of tourists who ‘get the T-shirt’ on their visit to Britain’s capital city know that anything with the Underground system map or the roundel logo printed on it will say ‘London’ to

the folks back home. For here the transport system takes centre stage in a way that no other capital city can match. Washington, Moscow, Tokyo and Paris may have their Metros, and Beijing’s Subway may be the world’s busiest, but none come close to rivalling London’s Underground as instant symbols of the city itself. Londoners love to grumble about their overcrowded system, but they should perhaps also feel a quiet sense of pride that the city that invented underground railways is still a world-leader 9