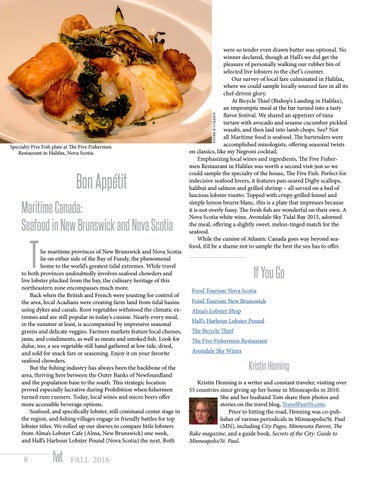 were so tender even drawn butter was optional. No winner declared, though at Hall’s we did get the pleasure of personally walking our rubber bin of selected live lobsters to the chef ’s counter. Our survey of local fare culminated in Halifax, where we could sample locally sourced fare in all its chef-driven glory. At Bicycle Thief (Bishop’s Landing in Halifax), an impromptu meal at the bar turned into a tasty flavor festival. We shared an appetizer of tuna tartare with avocado and sesame cucumber pickled wasabi, and then laid into lamb chops. See? Not all Maritime food is seafood. The bartenders were accomplished mixologists, offering seasonal twists on classics, like my Negroni cocktail. Emphasizing local wines and ingredients, The Five Fishermen Restaurant in Halifax was worth a second visit just so we could sample the specialty of the house, The Five Fish. Perfect for indecisive seafood lovers, it features pan-seared Digby scallops, halibut and salmon and grilled shrimp – all served on a bed of luscious lobster risotto. Topped with crispy grilled fennel and simple lemon beurre blanc, this is a plate that impresses because it is not overly fussy. The fresh fish are wonderful on their own. A Nova Scotia white wine, Avondale Sky Tidal Bay 2015, adorned the meal, offering a slightly sweet, melon-tinged match for the seafood. While the cuisine of Atlantic Canada goes way beyond seafood, it’d be a shame not to sample the best the sea has to offer.

he maritime provinces of New Brunswick and Nova Scotia lie on either side of the Bay of Fundy, the phenomenal home to the world’s greatest tidal extremes. While travel to both provinces undoubtedly involves seafood chowders and live lobster plucked from the bay, the culinary heritage of this northeastern zone encompasses much more. Back when the British and French were jousting for control of the area, local Acadians were creating farm land from tidal basins using dykes and canals. Root vegetables withstood the climatic extremes and are still popular in today’s cuisine. Nearly every meal, in the summer at least, is accompanied by impressive seasonal greens and delicate veggies. Farmers markets feature local cheeses, jams, and condiments, as well as meats and smoked fish. Look for dulse, too, a sea vegetable still hand gathered at low tide, dried, and sold for snack fare or seasoning. Enjoy it on your favorite seafood chowders. But the fishing industry has always been the backbone of the area, thriving here between the Outer Banks of Newfoundland and the population base to the south. This strategic location proved especially lucrative during Prohibition when fishermen turned rum runners. Today, local wines and micro beers offer more accessible beverage options. Seafood, and specifically lobster, still command center stage in the region, and fishing villages engage in friendly battles for top lobster titles. We rolled up our sleeves to compare little lobsters from Alma’s Lobster Cafe (Alma, New Brunswick) one week, and Hall’s Harbour Lobster Pound (Nova Scotia) the next. Both

Kristin Henning Kristin Henning is a writer and constant traveler, visiting over 55 countries since giving up her home in Minneapolis in 2010. She and her husband Tom share their photos and stories on the travel blog, TravelPast50.com. Prior to hitting the road, Henning was co-publisher of various periodicals in Minneapolis/St. Paul (MN), including City Pages, Minnesota Parent, The Rake magazine, and a guide book, Secrets of the City: Guide to Minneapolis/St. Paul.

Welcome to Issue Five of the quarterly FWT Magazine. It gives us great pleasure to bring you another issue, this one themed “USA & Canada.” 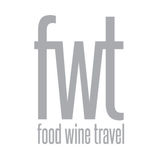