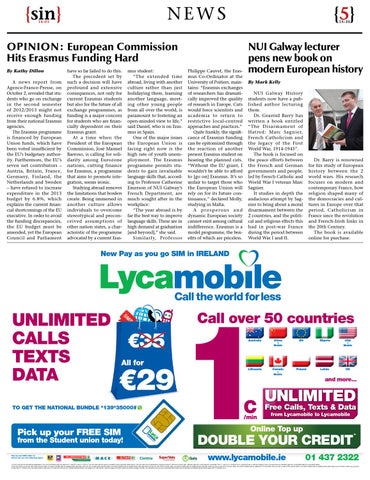 OPINION: European Commission Hits Erasmus Funding Hard By Kathy Dillon A news report from Agence-France-Presse, on October 2, revealed that students who go on exchange in the second semester of 2012/2013 might not receive enough funding from their national Erasmus agencies. The Erasmus programme is financed by European Union funds, which have been voted insufficient by the EU’s budgetary authority. Furthermore, the EU’s seven net contributors – Austria, Britain, France, Germany, Finland, the Netherlands and Sweden – have refused to increase expenditure in the 2013 budget by 6.8%, which explains the current financial shortcomings of the EU executive. In order to avoid the funding discrepancies, the EU budget must be amended, yet the European Council and Parliament

have so far failed to do this. The precedent set by such a decision will have profound and extensive consequences, not only for current Erasmus students but also for the future of all exchange programmes, as funding is a major concern for students who are financially dependent on their Erasmus grant. At a time when the President of the European Commission, José Manuel Barroso, is calling for solidarity among Eurozone nations, cutting finance for Erasmus, a programme that aims to promote integration, seems ironic. Studying abroad removes the limitations that borders create. Being immersed in another culture allows individuals to overcome stereotypical and preconceived assumptions of other nation states, a characteristic of the programme advocated by a current Eras-

mus student: “The extended time abroad, living with another culture rather than just holidaying there, learning another language, meeting other young people from all over the world, is paramount to fostering an open-minded view to life,” said Daniel, who is on Erasmus in Spain. One of the major issues the European Union is facing right now is the high rate of youth unemployment. The Erasmus programme permits students to gain invaluable language skills that, according to Professor Catherine Emerson of NUI Galway’s French Department, are much sought after in the workplace: “The year abroad is by far the best way to improve language skills. These are in high demand at graduation [and beyond],” she said. Similarly, Professor

Philippe Cauvet, the Erasmus Co-Ordinator at the University of Poitiers, maintains: “Erasmus exchanges of researchers has dramatically improved the quality of research in Europe. Cuts would force scientists and academia to return to restrictive local-centred approaches and practices.” Quite frankly, the significance of Erasmus funding can be epitomized through the reaction of another present Erasmus student on hearing the planned cuts. “Without the EU grant, I wouldn’t be able to afford to [go on] Erasmus. It’s so unfair to target those who the European Union will rely on for its future continuance,” declared Molly, studying in Malta. A prosperous and dynamic European society cannot exist among cultural indifference. Erasmus is a model programme, the benefits of which are priceless.

NUI Galway lecturer pens new book on modern European history By Mark Kelly NUI Galway History students now have a published author lecturing them. Dr. Gearóid Barry has written a book entitled “The Disarmament of Hatred: Marc Sagnier, French Catholicism and the legacy of the First World War, 1914-1945”. The book is focused on the peace efforts between the French and German governments and people, led by French Catholic and World War I veteran Marc Sagnier. It studies in depth the audacious attempt by Sagnier to bring about a moral disarmament between the 2 countries, and the political and religious effects this had in post-war France during the period between World War I and II.

Dr. Barry is renowned for his study of European history between the 2 world wars. His research focuses on modern and contemporary France, how religion shaped many of the democracies and cultures in Europe over that period, Catholicism in France since the revolution and French-Irish links in the 20th Century. The book is available online for purchase.

New Pay as you go SIM in IRELAND

UNLIMITED CALLS €35 TEXTS All for DATA

Pick up your FREE SIM

from the Student union today! Top-up your SIM online or where you see the following signs: 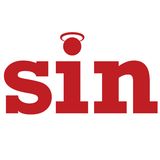