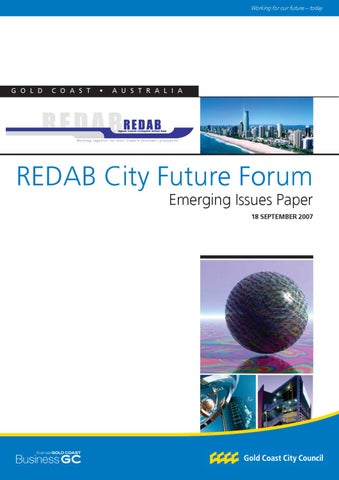 Purpose of the Paper The purpose of the emerging issues scan is to provoke the long term resilience and relevance of the current nine key industries described in the Gold Coast City’s 2010 Economic Development Strategy. It is intended that the scan will help participants of the REDAB City Future Forum to prepare for the workshop. The scan aims to extend your view of the future, challenge your images of the future, and your assumptions that shape both. Will these objectives effectively help businesses to navigate global and local changes so that they can prosper on the journey towards 2036 – is the Gold Coast a place where the world comes to work and play? Background In the past, natural attractions have underpinned Gold Coast City’s position as Australia’s premier tourist destination and one of Australia’s fastest growing regions for the past four decades.. However, the economic future of Gold Coast City will now be determined by the capacity of the City to diversify and strengthen an economy that is traditionally reliant on population based industries such as construction, retailing and service industries. Whilst the Gold Coast is on the way to becoming a diverse, robust and mature economy, on a level comparable with the major capital cities, there is a threat that its full potential will not be reached if the Gold Coast economy does not continue to diversify away from a heavy reliance on traditional industry sectors such as construction and tourism. Diversification of its economic base will ensure the City becomes more balanced and that sufficient wealth is generated to keep prosperity levels high. With population growth continuing to drive the City’s employment growth over the next thirty years it is imperative that initiatives which develop a broad and diversified industry base continue to be implemented as part of a long term approach to creating a powerful regional economy that meets the economic needs of the City’s residents. The City’s 2010 Economic Development Strategy has identified nine key industries to diversify business activity crucial to the competitiveness and strength of the Gold Coast economy and future prosperity of the City: Creative industries Education Environment Food Health & Medical Information & Communications Technology (ICT) Marine Sport Tourism

Also the Pacific Innovation Corridor program has identified 10 key geographical precincts to strategically: Promote the clustering of related firms and industry sectors to enhance knowledge, research and development. Ensure that the Gold Coast is globally competitive in telecommunications infrastructure and the adoption of resulting technologies. The City’s capacity to provide a prosperous economic future will depend on a wide range of strategic initiatives to navigate successfully into the future. For this to occur we must all think differently and challenge our established patterns of behaviour. Gold Coast City Council, through the Economic Development Branch, is working with local business and industry leaders to identify those future opportunities and strategies that will continue to drive the create the robust regional economy required of a City the size of the Gold Coast. Emerging Issues – what are they? Emerging issues are not those recognised trends or problems that one typically reads or hears about in the news. Emerging issues tend to be only small seeds or discoveries now that in 30 years time could have dramatic consequences to our ways of living and work. Previous studies in forecasting and modern history have shown a 30 year s-curve for an emerging issue to become an empirical trend then a mainstream problem or new condition. (e.g. global warming research began in the 1970s but only in 2007 has climate change become a main stream problem). The s-curve pattern of social change can provoke us to anticipate what emerging issues now, may create new life conditions in 20-30 yrs? What follows next are stories of possibilities that may impact on the Gold Coast’s key industries that underpins your current Economic Development Strategy. Each asks you to consider the “what if” question to see if you have robust, long-term strategies and the community capacity to navigate change within each key industry sector towards your City’s preferred future. The main emerging issues identified by the futures scan and used in the stories include: Impacts of Climate Change The smart, cyber society; Hyper home-centredness; Food security; Crisis of the human condition; Hyper-aging; Economic restructuring to reduce ecological footprints (zero emission/zero waste by 2075) Bio-security (Pandemic)

What if, in 2036…? Creative industries are being affected by a decline in community spirit and participation due to a crisis of human identity and meaning. This crisis is driven by the converging technologies of artificial intelligence and robotics, genomics (genetic enhancements) and advances in consciousness studies along with the collapse of Western Religions. The result is a blurring of the 20th century notions of human identity, purpose, spirituality and what is real. Basically mainstream Australia and our creative class (artists, designers and visionaries) are confused about how to celebrate, what it is to be human and our endeavours. What was once thought to be the last quality of humanness – creative expression – is being mimicked by “intelligent” quantum computers. The Arts (visual, literary, performing, fashion) are caught up in trying to make sense of this great shift as well as re-casting past eras of “nobler certainty”. Education is transforming due to the complex interaction of conflicting forces. On the one hand the aging Coast population with the overall decrease in youth means that Schools and Universities are facing reduced revenues from local student intakes. Shortfalls in funding need to be taken up by either more international and virtual (online) students throughout the Asia-Pacific region, or by gearing up the education focus towards life-long learning to advance the “productive/active aging” of locals, particularly in the work force. Which industry sectors will the Educational Institutions target to re-engineer their own teaching and learning capacities to offer back to the local, global and virtual communities? Simultaneously, schools and universities are becoming more important as community hubs and social places where people can experience human interaction in the face of technological change and the human crisis. Industries leveraging off the Gold Coast’s ecosystem services (Environment) are affected by the impacts of Climate Change. These impacts include the loss of biodiversity (plant and animal species that preferred a sub-tropical habitat) due to prolonged drought and average temperature rise. Due to rising sea levels, the coastal wetlands between Southport and Jacob’s Well are at increased risk of inundation during storm surges with unknown consequences to this fragile habitat.

What industry and export development opportunities are booming as Australian businesses invests 3% of its Gross Domestic Product per annum to reduce its greenhouse gas emissions under an Asia-Pacific Regional Carbon trading scheme. International agreements triggered the introduction of mandatory eco-footprint food labelling and “food miles” for all fresh and processed food. This provides consumers with the facts about the real carbon-chain costs of imported and local food products. As a result, the resurgence of the “slow food movement” on the Gold Coast strengthens regionally branded food products and promotes them as healthy for the environment, healthy for the community and healthy for authentic dining/cultural experiences. However, the Country is gripped by a 15 year drought which is dramatically challenging the Nation’s food security, affecting the affordability of food for all communities. Restaurant dining is becoming the pastime of the wealthy, accentuating the social divide between the haves and have nots. But hope persists as urban food gardens both private and community based are being planted across the city. Health and Medical advancements are driving the phenomenon of hyper-aging where the number of Octogenarians in the community is increasing by 3% per annum and comprises 10% of the population (ABS, Australian Social Trends, 2006). Rising community expectations by the aging Baby Boomers for quality health care is placing fiscal pressure on Federal and Regional Governments as the labour shortages in the health care sector worsens. Gold Coast Hospitals are considering the business case for trialling robotic nurses and carers based on Japan’s experience. The prevalence of brain damage with associated mental illness and cognitive disability due to alcohol poisoning within the now middle-aged “Y generation” is affecting productivity within the workforce. The public campaigns about the risks of alcohol consumption/abuse and its social impacts rival those of the anti-smoking and obesity campaigns at the turn of the century. In this context how are holistic health and lifestyle resorts on the Gold Coast adapting to change? Information & Communications Technology (ICT) with

its ubiquitous computing presence (smart cloths, smart homes and appliances) and connectivity to local and global networks and service providers continues to drive the lifestyle trend: “hyper home-centredness”. This new lifestyle trend simultaneously extends the reach of the individual from the home particularly through customised home-based consumption, whilst collapsing the circle of community interaction and engagement to fewer, specific sub-cultures and groups. New levels of personal and corporate leverage are possible through converging physical and virtual collaboration/connections using “telepresence” technology. Marine Industry: Due to rising sea levels and the increased risk of storm surges the long-term infrastructure investment at the Coomera Marine Industry Precinct is being threatened. The negative economic impacts to the recreational boat building industry and its export market are significant and a range of protective infrastructure solutions and counter disaster packages are being considered by the city. Within the local marine industry, a renaissance in water transport and recreation is increasing demand which is being met with a new generation of smart wind, solar, hydrogen, biofuel and hybrid powered boats. Sport: Hyper-homecentredness has reduced the participation and volunteerism rates of the “Y-generation” parents within Gold Coast sporting clubs – stressing their financial viability. To survive, clubs are re-branding themselves to capture the active aging lifestyle of the “X-geners” and “late Baby Boomers”. However for the youth, online extreme gaming and virtual, real time, interactive team sports have leaped to new levels of participation. You can learn and play any

individual or team sport from the convenience of your home through “telepresence” technology into a virtual world. The past trend of fitting out suburbs with home theatres was superseded with virtual games rooms with connectivity to virtual sporting institutions and centres of excellence that monitor and coach performance. “Real Sports” played at the national and international levels continue to prosper as they provide entertainment within a growing recreation and leisure market. Tourism on the Gold Coast is at a low because of a range of forces. (1) The cost of aviation spiked because of declining oil reserves and the delayed production of the first generation of hydrogen fuelled aircraft due to government safety regulations. (2) The creative class have shifted their eco-tourism consumption to other regions with a stronger “lovemark” (brand) connected to the natural environment such as the Kimberley Coast, Whitsunday Islands and Port Douglas. (3) The resident population on the Gold Coast in 2036 is about 800,000 people; almost double the year 2000 population. The impact of this growth has effectively crowded out the visitors from the Coast’s beaches and tourist attractions. Lastly, the bio-security alert in Jakarta over a possible bird flu mutation and pandemic sent shock waves across the World and the minds of globetrotters. As a result, the City has experienced increased virtual visitations to its 3D virtual Gold Coast hosted by Google Earth.