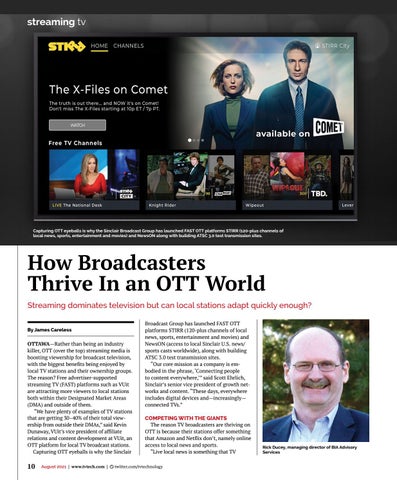 Capturing OTT eyeballs is why the Sinclair Broadcast Group has launched FAST OTT platforms STIRR (120-plus channels of local news, sports, entertainment and movies) and NewsON along with building ATSC 3.0 test transmission sites.

How Broadcasters Thrive In an OTT World Streaming dominates television but can local stations adapt quickly enough? By James Careless

OTTAWA—Rather than being an industry killer, OTT (over the top) streaming media is boosting viewership for broadcast television, with the biggest benefits being enjoyed by local TV stations and their ownership groups. The reason? Free advertiser-supported streaming TV (FAST) platforms such as VUit are attracting more viewers to local stations both within their Designated Market Areas (DMA) and outside of them. “We have plenty of examples of TV stations that are getting 30–40% of their total viewership from outside their DMAs,” said Kevin Dunaway, VUit’s vice president of affiliate relations and content development at VUit, an OTT platform for local TV broadcast stations. Capturing OTT eyeballs is why the Sinclair

COMPETING WITH THE GIANTS The reason TV broadcasters are thriving on OTT is because their stations offer something that Amazon and Netflix don’t, namely online access to local news and sports. “Live local news is something that TV