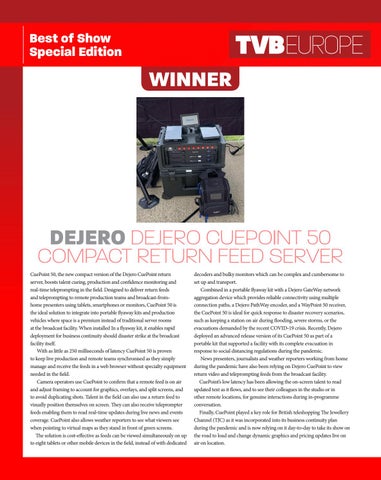 DEJERO DEJERO CUEPOINT 50 COMPACT RETURN FEED SERVER CuePoint 50, the new compact version of the Dejero CuePoint return server, boosts talent cueing, production and confidence monitoring and real-time teleprompting in the field. Designed to deliver return feeds and teleprompting to remote production teams and broadcast-fromhome presenters using tablets, smartphones or monitors, CuePoint 50 is the ideal solution to integrate into portable flyaway kits and production vehicles where space is a premium instead of traditional server rooms at the broadcast facility. When installed In a flyaway kit, it enables rapid deployment for business continuity should disaster strike at the broadcast facility itself. With as little as 250 milliseconds of latency CuePoint 50 is proven to keep live production and remote teams synchronised as they simply manage and receive the feeds in a web browser without specialty equipment needed in the field. Camera operators use CuePoint to confirm that a remote feed is on air and adjust framing to account for graphics, overlays, and split screens, and to avoid duplicating shots. Talent in the field can also use a return feed to visually position themselves on screen. They can also receive teleprompter feeds enabling them to read real-time updates during live news and events coverage. CuePoint also allows weather reporters to see what viewers see when pointing to virtual maps as they stand in front of green screens. The solution is cost-effective as feeds can be viewed simultaneously on up to eight tablets or other mobile devices in the field, instead of with dedicated

decoders and bulky monitors which can be complex and cumbersome to set up and transport. Combined in a portable flyaway kit with a Dejero GateWay network aggregation device which provides reliable connectivity using multiple connection paths, a Dejero PathWay encoder, and a WayPoint 50 receiver, the CuePoint 50 is ideal for quick response to disaster recovery scenarios, such as keeping a station on air during flooding, severe storms, or the evacuations demanded by the recent COVID-19 crisis. Recently, Dejero deployed an advanced release version of its CuePoint 50 as part of a portable kit that supported a facility with its complete evacuation in response to social distancing regulations during the pandemic. News presenters, journalists and weather reporters working from home during the pandemic have also been relying on Dejero CuePoint to view return video and teleprompting feeds from the broadcast facility. CuePointâ&#x20AC;&#x2122;s low latency has been allowing the on-screen talent to read updated text as it flows, and to see their colleagues in the studio or in other remote locations, for genuine interactions during in-programme conversation. Finally, CuePoint played a key role for British teleshopping The Jewellery Channel (TJC) as it was incorporated into its business continuity plan during the pandemic and is now relying on it day-to-day to take its show on the road to load and change dynamic graphics and pricing updates live on air on location.

A special guide to all the nominated & winning products featured around. The 2020 IBC Showcase.

A special guide to all the nominated & winning products featured around. The 2020 IBC Showcase.