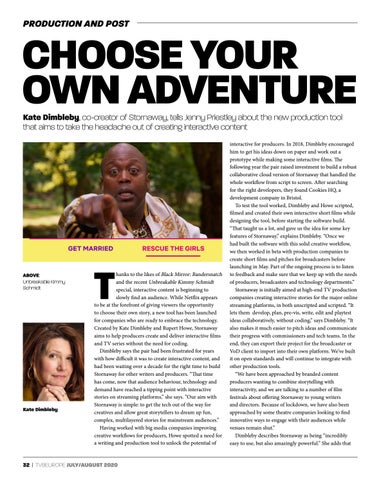 CHOOSE YOUR OWN ADVENTURE Kate Dimbleby, co-creator of Stornaway, tells Jenny Priestley about the new production tool that aims to take the headache out of creating interactive content

hanks to the likes of Black Mirror: Bandersnatch and the recent Unbreakable Kimmy Schmidt special, interactive content is beginning to slowly find an audience. While Netflix appears to be at the forefront of giving viewers the opportunity to choose their own story, a new tool has been launched for companies who are ready to embrace the technology. Created by Kate Dimbleby and Rupert Howe, Stornaway aims to help producers create and deliver interactive films and TV series without the need for coding. Dimbleby says the pair had been frustrated for years with how difficult it was to create interactive content, and had been waiting over a decade for the right time to build Stornaway for other writers and producers. “That time has come, now that audience behaviour, technology and demand have reached a tipping point with interactive stories on streaming platforms,” she says. “Our aim with Stornaway is simple: to get the tech out of the way for creatives and allow great storytellers to dream up fun, complex, multilayered stories for mainstream audiences.” Having worked with big media companies improving creative workflows for producers, Howe spotted a need for a writing and production tool to unlock the potential of

interactive for producers. In 2018, Dimbleby encouraged him to get his ideas down on paper and work out a prototype while making some interactive films. The following year the pair raised investment to build a robust collaborative cloud version of Stornaway that handled the whole workflow from script to screen. After searching for the right developers, they found Cookies HQ, a development company in Bristol. To test the tool worked, Dimbleby and Howe scripted, filmed and created their own interactive short films while designing the tool, before starting the software build. “That taught us a lot, and gave us the idea for some key features of Stornaway,” explains Dimbleby. “Once we had built the software with this solid creative workflow, we then worked in beta with production companies to create short films and pitches for broadcasters before launching in May. Part of the ongoing process is to listen to feedback and make sure that we keep up with the needs of producers, broadcasters and technology departments.” Stornaway is initially aimed at high-end TV production companies creating interactive stories for the major online streaming platforms, in both unscripted and scripted. “It lets them develop, plan, pre-vis, write, edit and playtest ideas collaboratively, without coding,” says Dimbleby. “It also makes it much easier to pitch ideas and communicate their progress with commissioners and tech teams. In the end, they can export their project for the broadcaster or VoD client to import into their own platform. We’ve built it on open standards and will continue to integrate with other production tools. “We have been approached by branded content producers wanting to combine storytelling with interactivity, and we are talking to a number of film festivals about offering Stornaway to young writers and directors. Because of lockdown, we have also been approached by some theatre companies looking to find innovative ways to engage with their audiences while venues remain shut.” Dimbleby describes Stornaway as being “incredibly easy to use, but also amazingly powerful.” She adds that