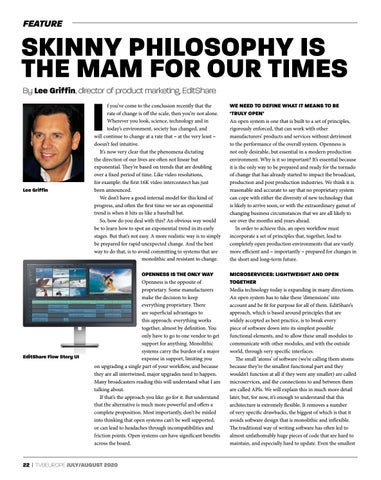 SKINNY PHILOSOPHY IS THE MAM FOR OUR TIMES By Lee Griffin, director of product marketing, EditShare

f you’ve come to the conclusion recently that the rate of change is off the scale, then you’re not alone. Wherever you look, science, technology and in today’s environment, society has changed, and will continue to change at a rate that – at the very least – doesn’t feel intuitive. It’s now very clear that the phenomena dictating the direction of our lives are often not linear but exponential. They’re based on trends that are doubling over a fixed period of time. Like video resolutions, for example: the first 16K video interconnect has just been announced. We don’t have a good internal model for this kind of progress, and often the first time we see an exponential trend is when it hits us like a baseball bat. So, how do you deal with this? An obvious way would be to learn how to spot an exponential trend in its early stages. But that’s not easy. A more realistic way is to simply be prepared for rapid unexpected change. And the best way to do that, is to avoid committing to systems that are monolithic and resistant to change.

WE NEED TO DEFINE WHAT IT MEANS TO BE ‘TRULY OPEN’ An open system is one that is built to a set of principles, rigorously enforced, that can work with other manufacturers’ products and services without detriment to the performance of the overall system. Openness is not only desirable, but essential in a modern production environment. Why is it so important? It’s essential because it is the only way to be prepared and ready for the tornado of change that has already started to impact the broadcast, production and post production industries. We think it is reasonable and accurate to say that no proprietary system can cope with either the diversity of new technology that is likely to arrive soon, or with the extraordinary gamut of changing business circumstances that we are all likely to see over the months and years ahead. In order to achieve this, an open workflow must incorporate a set of principles that, together, lead to completely open production environments that are vastly more efficient and – importantly – prepared for changes in the short and long-term future.

OPENNESS IS THE ONLY WAY Openness is the opposite of proprietary. Some manufacturers make the decision to keep everything proprietary. There are superficial advantages to this approach: everything works together, almost by definition. You only have to go to one vendor to get support for anything. Monolithic systems carry the burden of a major expense in support, limiting you on upgrading a single part of your workflow, and because they are all intertwined, major upgrades need to happen. Many broadcasters reading this will understand what I am talking about. If that’s the approach you like: go for it. But understand that the alternative is much more powerful and offers a complete proposition. Most importantly, don’t be misled into thinking that open systems can’t be well supported, or can lead to headaches through incompatibilities and friction points. Open systems can have significant benefits across the board.

MICROSERVICES: LIGHTWEIGHT AND OPEN TOGETHER Media technology today is expanding in many directions. An open system has to take these ‘dimensions’ into account and be fit for purpose for all of them. EditShare’s approach, which is based around principles that are widely accepted as best practice, is to break every piece of software down into its simplest possible functional elements, and to allow these small modules to communicate with other modules, and with the outside world, through very specific interfaces. The small ‘atoms’ of software (we’re calling them atoms because they’re the smallest functional part and they wouldn’t function at all if they were any smaller) are called microservices, and the connections to and between them are called APIs. We will explain this in much more detail later, but, for now, it’s enough to understand that this architecture is extremely flexible. It removes a number of very specific drawbacks, the biggest of which is that it avoids software design that is monolithic and inflexible. The traditional way of writing software has often led to almost unfathomably huge pieces of code that are hard to maintain, and especially hard to update. Even the smallest