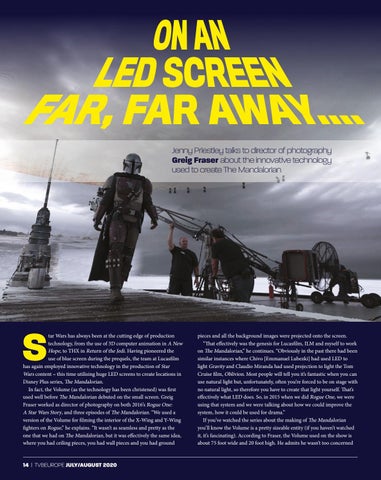 tar Wars has always been at the cutting edge of production technology, from the use of 3D computer animation in A New Hope, to THX in Return of the Jedi. Having pioneered the use of blue screen during the prequels, the team at Lucasfilm has again employed innovative technology in the production of Star Wars content – this time utilising huge LED screens to create locations in Disney Plus series, The Mandalorian. In fact, the Volume (as the technology has been christened) was first used well before The Mandalorian debuted on the small screen. Greig Fraser worked as director of photography on both 2016’s Rogue One: A Star Wars Story, and three episodes of The Mandalorian. “We used a version of the Volume for filming the interior of the X-Wing and Y-Wing fighters on Rogue,” he explains. “It wasn’t as seamless and pretty as the one that we had on The Mandalorian, but it was effectively the same idea, where you had ceiling pieces, you had wall pieces and you had ground

pieces and all the background images were projected onto the screen. “That effectively was the genesis for Lucasfilm, ILM and myself to work on The Mandalorian,” he continues. “Obviously in the past there had been similar instances where Chivo [Emmanuel Lubezki] had used LED to light Gravity and Claudio Miranda had used projection to light the Tom Cruise film, Oblivion. Most people will tell you it’s fantastic when you can use natural light but, unfortunately, often you’re forced to be on stage with no natural light, so therefore you have to create that light yourself. That’s effectively what LED does. So, in 2015 when we did Rogue One, we were using that system and we were talking about how we could improve the system, how it could be used for drama.” If you’ve watched the series about the making of The Mandalorian you’ll know the Volume is a pretty sizeable entity (if you haven’t watched it, it’s fascinating). According to Fraser, the Volume used on the show is about 75 foot wide and 20 foot high. He admits he wasn’t too concerned