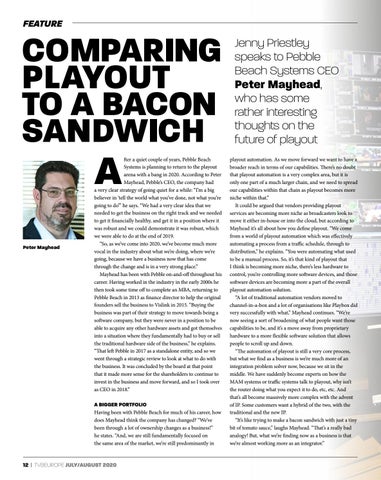 COMPARING PLAYOUT TO A BACON SANDWICH

fter a quiet couple of years, Pebble Beach Systems is planning to return to the playout arena with a bang in 2020. According to Peter Mayhead, Pebble’s CEO, the company had a very clear strategy of going quiet for a while: “I’m a big believer in ‘tell the world what you’ve done, not what you’re going to do’” he says. “We had a very clear idea that we needed to get the business on the right track and we needed to get it financially healthy, and get it in a position where it was robust and we could demonstrate it was robust, which we were able to do at the end of 2019. “So, as we’ve come into 2020, we’ve become much more vocal in the industry about what we’re doing, where we’re going, because we have a business now that has come through the change and is in a very strong place.” Mayhead has been with Pebble on-and-off throughout his career. Having worked in the industry in the early 2000s he then took some time off to complete an MBA, returning to Pebble Beach in 2013 as finance director to help the original founders sell the business to Vislink in 2015. “Buying the business was part of their strategy to move towards being a software company, but they were never in a position to be able to acquire any other hardware assets and got themselves into a situation where they fundamentally had to buy or sell the traditional hardware side of the business,” he explains. “That left Pebble in 2017 as a standalone entity, and so we went through a strategic review to look at what to do with the business. It was concluded by the board at that point that it made more sense for the shareholders to continue to invest in the business and move forward, and so I took over as CEO in 2018.” A BIGGER PORTFOLIO Having been with Pebble Beach for much of his career, how does Mayhead think the company has changed? “We’ve been through a lot of ownership changes as a business!” he states. “And, we are still fundamentally focused on the same area of the market, we’re still predominantly in

Jenny Priestley speaks to Pebble Beach Systems CEO Peter Mayhead, who has some rather interesting thoughts on the future of playout playout automation. As we move forward we want to have a broader reach in terms of our capabilities. There’s no doubt that playout automation is a very complex area, but it is only one part of a much larger chain, and we need to spread our capabilities within that chain as playout becomes more niche within that.” It could be argued that vendors providing playout services are becoming more niche as broadcasters look to move it either in-house or into the cloud, but according to Mayhead it’s all about how you define playout. “We come from a world of playout automation which was effectively automating a process from a traffic schedule, through to distribution,” he explains. “You were automating what used to be a manual process. So, it’s that kind of playout that I think is becoming more niche, there’s less hardware to control, you’re controlling more software devices, and those software devices are becoming more a part of the overall playout automation solution. “A lot of traditional automation vendors moved to channel-in-a-box and a lot of organisations like Playbox did very successfully with what,” Mayhead continues. “We’re now seeing a sort of broadening of what people want those capabilities to be, and it’s a move away from proprietary hardware to a more flexible software solution that allows people to scroll up and down. “The automation of playout is still a very core process, but what we find as a business is we’re much more of an integration problem solver now, because we sit in the middle. We have suddenly become experts on how the MAM systems or traffic systems talk to playout, why isn’t the router doing what you expect it to do, etc, etc. And that’s all become massively more complex with the advent of IP. Some customers want a hybrid of the two, with the traditional and the new IP. “It’s like trying to make a bacon sandwich with just a tiny bit of tomato sauce,” laughs Mayhead. “That’s a really bad analogy! But, what we’re finding now as a business is that we’re almost working more as an integrator.”