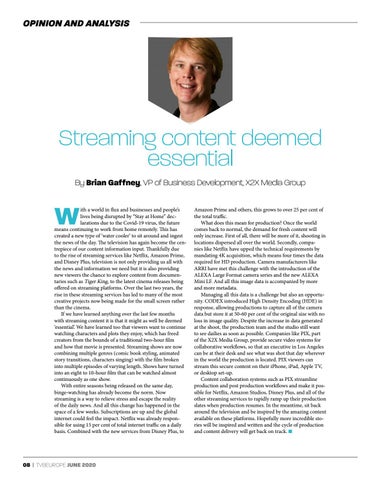 ith a world in flux and businesses and people’s lives being disrupted by “Stay at Home” declarations due to the Covid-19 virus, the future means continuing to work from home remotely. This has created a new type of ‘water cooler’ to sit around and ingest the news of the day. The television has again become the centrepiece of our content information input. Thankfully due to the rise of streaming services like Netflix, Amazon Prime, and Disney Plus, television is not only providing us all with the news and information we need but it is also providing new viewers the chance to explore content from documentaries such as Tiger King, to the latest cinema releases being offered on streaming platforms. Over the last two years, the rise in these streaming services has led to many of the most creative projects now being made for the small screen rather than the cinema. If we have learned anything over the last few months with streaming content it is that it might as well be deemed ‘essential’. We have learned too that viewers want to continue watching characters and plots they enjoy, which has freed creators from the bounds of a traditional two-hour film and how that movie is presented. Streaming shows are now combining multiple genres (comic book styling, animated story transitions, characters singing) with the film broken into multiple episodes of varying length. Shows have turned into an eight to 10-hour film that can be watched almost continuously as one show. With entire seasons being released on the same day, binge-watching has already become the norm. Now streaming is a way to relieve stress and escape the reality of the daily news. And all this change has happened in the space of a few weeks. Subscriptions are up and the global internet could feel the impact. Netflix was already responsible for using 15 per cent of total internet traffic on a daily basis. Combined with the new services from Disney Plus, to

Amazon Prime and others, this grows to over 25 per cent of the total traffic. What does this mean for production? Once the world comes back to normal, the demand for fresh content will only increase. First of all, there will be more of it, shooting in locations dispersed all over the world. Secondly, companies like Netflix have upped the technical requirements by mandating 4K acquisition, which means four times the data required for HD production. Camera manufacturers like ARRI have met this challenge with the introduction of the ALEXA Large Format camera series and the new ALEXA Mini LF. And all this image data is accompanied by more and more metadata. Managing all this data is a challenge but also an opportunity. CODEX introduced High Density Encoding (HDE) in response, allowing productions to capture all of the camera data but store it at 50-60 per cent of the original size with no loss in image quality. Despite the increase in data generated at the shoot, the production team and the studio still want to see dailies as soon as possible. Companies like PIX, part of the X2X Media Group, provide secure video systems for collaborative workflows, so that an executive in Los Angeles can be at their desk and see what was shot that day wherever in the world the production is located. PIX viewers can stream this secure content on their iPhone, iPad, Apple TV, or desktop set-up. Content collaboration systems such as PIX streamline production and post production workflows and make it possible for Netflix, Amazon Studios, Disney Plus, and all of the other streaming services to rapidly ramp up their production slates when production resumes. In the meantime, sit back around the television and be inspired by the amazing content available on these platforms. Hopefully more incredible stories will be inspired and written and the cycle of production and content delivery will get back on track. n

Streaming big: A look at the current streaming landscape.