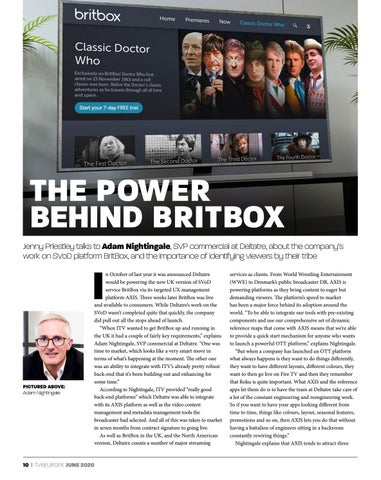 THE POWER BEHIND BRITBOX Jenny Priestley talks to Adam Nightingale, SVP commercial at Deltatre, about the company’s work on SVoD platform BritBox, and the importance of identifying viewers by their tribe

n October of last year it was announced Deltatre would be powering the new UK version of SVoD service BritBox via its targeted UX management platform AXIS. Three weeks later BritBox was live and available to consumers. While Deltatre’s work on the SVoD wasn’t completed quite that quickly, the company did pull out all the stops ahead of launch. “When ITV wanted to get BritBox up and running in the UK it had a couple of fairly key requirements,” explains Adam Nightingale, SVP commercial at Deltatre. “One was time to market, which looks like a very smart move in terms of what’s happening at the moment. The other one was an ability to integrate with ITV’s already pretty robust back-end that it’s been building out and enhancing for some time.” According to Nightingale, ITV provided “really good back-end platforms” which Deltatre was able to integrate with its AXIS platform as well as the video content management and metadata management tools the broadcaster had selected. And all of this was taken to market in seven months from contract signature to going live. As well as BritBox in the UK, and the North American version, Deltatre counts a number of major streaming

services as clients. From World Wrestling Entertainment (WWE) to Denmark’s public broadcaster DR, AXIS is powering platforms as they bring content to eager but demanding viewers. The platform’s speed to market has been a major force behind its adoption around the world. “To be able to integrate our tools with pre-existing components and use our comprehensive set of dynamic reference maps that come with AXIS means that we’re able to provide a quick start mechanism for anyone who wants to launch a powerful OTT platform,” explains Nightingale. “But when a company has launched an OTT platform what always happens is they want to do things differently, they want to have different layouts, different colours, they want to then go live on Fire TV and then they remember that Roku is quite important. What AXIS and the reference apps let them do is to have the team at Deltatre take care of a lot of the constant engineering and reengineering work. So if you want to have your apps looking different from time to time, things like colours, layout, seasonal features, promotions and so on, then AXIS lets you do that without having a battalion of engineers sitting in a backroom constantly rewiring things.” Nightingale explains that AXIS tends to attract three

Streaming big: A look at the current streaming landscape.