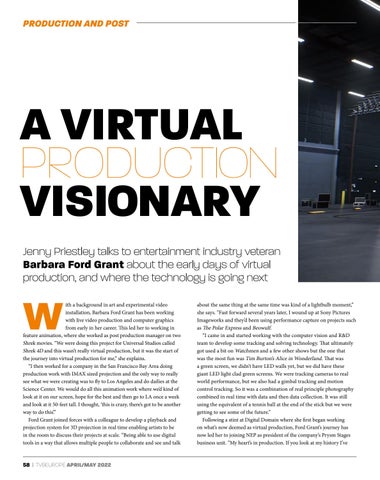 A VIRTUAL PRODUCTION VISIONARY Jenny Priestley talks to entertainment industry veteran Barbara Ford Grant about the early days of virtual production, and where the technology is going next

ith a background in art and experimental video installation, Barbara Ford Grant has been working with live video production and computer graphics from early in her career. This led her to working in feature animation, where she worked as post production manager on two Shrek movies. “We were doing this project for Universal Studios called Shrek 4D and this wasn’t really virtual production, but it was the start of the journey into virtual production for me,” she explains. “I then worked for a company in the San Francisco Bay Area doing production work with IMAX sized projection and the only way to really see what we were creating was to fly to Los Angeles and do dailies at the Science Center. We would do all this animation work where we’d kind of look at it on our screen, hope for the best and then go to LA once a week and look at it 50-feet tall. I thought, ‘this is crazy, there’s got to be another way to do this’.” Ford Grant joined forces with a colleague to develop a playback and projection system for 3D projection in real time enabling artists to be in the room to discuss their projects at scale. “Being able to use digital tools in a way that allows multiple people to collaborate and see and talk

about the same thing at the same time was kind of a lightbulb moment,” she says. “Fast forward several years later, I wound up at Sony Pictures Imageworks and they’d been using performance capture on projects such as The Polar Express and Beowulf. “I came in and started working with the computer vision and R&amp;D team to develop some tracking and solving technology. That ultimately got used a bit on Watchmen and a few other shows but the one that was the most fun was Tim Burton’s Alice in Wonderland. That was a green screen, we didn’t have LED walls yet, but we did have these giant LED light clad green screens. We were tracking cameras to real world performance, but we also had a gimbal tracking and motion control tracking. So it was a combination of real principle photography combined in real time with data and then data collection. It was still using the equivalent of a tennis ball at the end of the stick but we were getting to see some of the future.” Following a stint at Digital Domain where she first began working on what’s now deemed as virtual production, Ford Grant’s journey has now led her to joining NEP as president of the company’s Prysm Stages business unit. “My heart’s in production. If you look at my history I’ve