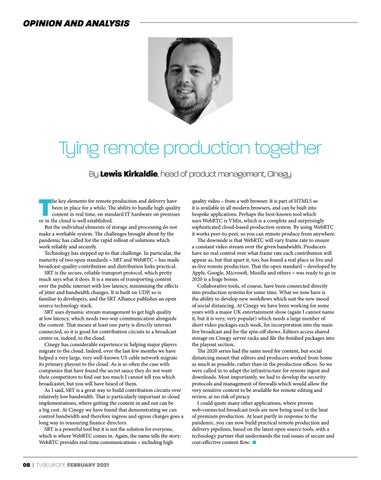 he key elements for remote production and delivery have been in place for a while. The ability to handle high quality content in real time, on standard IT hardware on premises or in the cloud is well established. But the individual elements of storage and processing do not make a workable system. The challenges brought about by the pandemic has called for the rapid rollout of solutions which work reliably and securely. Technology has stepped up to that challenge. In particular, the maturity of two open standards – SRT and WebRTC – has made broadcast-quality contribution and distribution links practical. SRT is the secure, reliable transport protocol, which pretty much says what it does. It is a means of transporting content over the public internet with low latency, minimising the effects of jitter and bandwidth changes. It is built on UDP, so is familiar to developers, and the SRT Alliance publishes an open source technology stack. SRT uses dynamic stream management to get high quality at low latency, which needs two-way communication alongside the content. That means at least one party is directly internet connected, so it is good for contribution circuits to a broadcast centre or, indeed, to the cloud. Cinegy has considerable experience in helping major players migrate to the cloud. Indeed, over the last few months we have helped a very large, very well-known US cable network migrate its primary playout to the cloud. As is so often the case with companies that have found the secret sauce they do not want their competitors to find out too much I cannot tell you which broadcaster, but you will have heard of them. As I said, SRT is a great way to build contribution circuits over relatively low bandwidth. That is particularly important in cloud implementations, where getting the content in and out can be a big cost. At Cinegy we have found that demonstrating we can control bandwidth and therefore ingress and egress charges goes a long way to reassuring finance directors. SRT is a powerful tool but it is not the solution for everyone, which is where WebRTC comes in. Again, the name tells the story: WebRTC provides real-time communications – including high

quality video – from a web browser. It is part of HTML5 so it is available in all modern browsers, and can be built into bespoke applications. Perhaps the best-known tool which uses WebRTC is VMix, which is a complete and surprisingly sophisticated cloud-based production system. By using WebRTC it works peer-to-peer, so you can remote produce from anywhere. The downside is that WebRTC will vary frame rate to ensure a constant video stream over the given bandwidth. Producers have no real control over what frame rate each contribution will appear as, but that apart it, too, has found a real place in live and as-live remote production. That the open standard – developed by Apple, Google, Microsoft, Mozilla and others – was ready to go in 2020 is a huge bonus. Collaborative tools, of course, have been connected directly into production systems for some time. What we now have is the ability to develop new workflows which suit the new mood of social distancing. At Cinegy we have been working for some years with a major UK entertainment show (again I cannot name it, but it is very, very popular) which needs a large number of short video packages each week, for incorporation into the main live broadcast and for the spin-off shows. Editors access shared storage on Cinegy server racks and file the finished packages into the playout section. The 2020 series had the same need for content, but social distancing meant that editors and producers worked from home as much as possible, rather than in the production offices. So we were called in to adapt the infrastructure for remote ingest and downloads. Most importantly, we had to develop the security protocols and management of firewalls which would allow the very sensitive content to be available for remote editing and review, at no risk of piracy. I could quote many other applications, where proven web-connected broadcast tools are now being used in the heat of premium production. At least partly in response to the pandemic, you can now build practical remote production and delivery pipelines, based on the latest open source tools, with a technology partner that understands the real issues of secure and cost-effective content flow. n