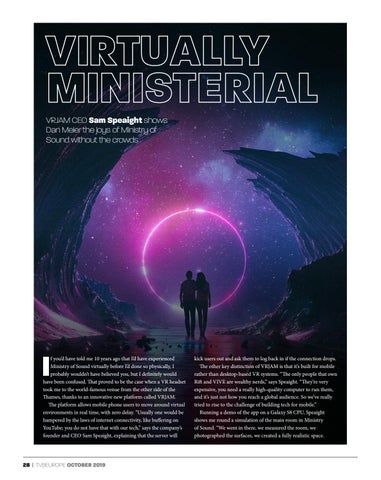 f you’d have told me 10 years ago that I’d have experienced Ministry of Sound virtually before I’d done so physically, I probably wouldn’t have believed you, but I definitely would have been confused. That proved to be the case when a VR headset took me to the world-famous venue from the other side of the Thames, thanks to an innovative new platform called VRJAM. The platform allows mobile phone users to move around virtual environments in real time, with zero delay. “Usually one would be hampered by the laws of internet connectivity, like buffering on YouTube; you do not have that with our tech,” says the company’s founder and CEO Sam Speaight, explaining that the server will

kick users out and ask them to log back in if the connection drops. The other key distinction of VRJAM is that it’s built for mobile rather than desktop-based VR systems. “The only people that own Rift and VIVE are wealthy nerds,” says Speaight. “They’re very expensive, you need a really high-quality computer to run them, and it’s just not how you reach a global audience. So we’ve really tried to rise to the challenge of building tech for mobile.” Running a demo of the app on a Galaxy S8 CPU, Speaight shows me round a simulation of the main room in Ministry of Sound. “We went in there, we measured the room, we photographed the surfaces, we created a fully realistic space.

Come join the Serkis The actor/director explains how technology has had a profound impact on his career.