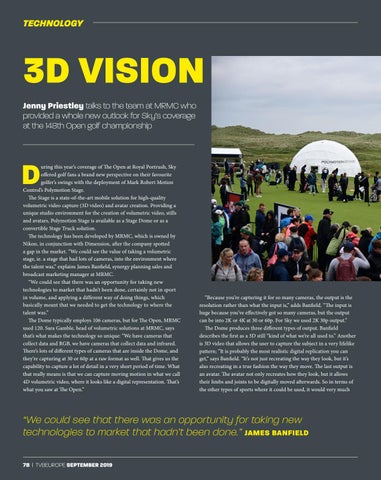 uring this year’s coverage of The Open at Royal Portrush, Sky offered golf fans a brand new perspective on their favourite golfer’s swings with the deployment of Mark Robert Motion Control’s Polymotion Stage. The Stage is a state-of-the-art mobile solution for high-quality volumetric video capture (3D video) and avatar creation. Providing a unique studio environment for the creation of volumetric video, stills and avatars, Polymotion Stage is available as a Stage Dome or as a convertible Stage Truck solution. The technology has been developed by MRMC, which is owned by Nikon, in conjunction with Dimension, after the company spotted a gap in the market. “We could see the value of taking a volumetric stage, ie. a stage that had lots of cameras, into the environment where the talent was,” explains James Banfield, synergy planning sales and broadcast marketing manager at MRMC. “We could see that there was an opportunity for taking new technologies to market that hadn’t been done, certainly not in sport in volume, and applying a different way of doing things, which basically meant that we needed to get the technology to where the talent was.” The Dome typically employs 106 cameras, but for The Open, MRMC used 120. Sara Gamble, head of volumetric solutions at MRMC, says that’s what makes the technology so unique: “We have cameras that collect data and RGB, we have cameras that collect data and infrared. There’s lots of different types of cameras that are inside the Dome, and they’re capturing at 30 or 60p at a raw format as well. That gives us the capability to capture a lot of detail in a very short period of time. What that really means is that we can capture moving motion in what we call 4D volumetric video, where it looks like a digital representation. That’s what you saw at The Open.”

“Because you’re capturing it for so many cameras, the output is the resolution rather than what the input is,” adds Banfield. “The input is huge because you’ve effectively got so many cameras, but the output can be into 2K or 4K at 30 or 60p. For Sky we used 2K 30p output.” The Dome produces three different types of output. Banfield describes the first as a 3D still “kind of what we’re all used to.” Another is 3D video that allows the user to capture the subject in a very lifelike pattern; “It is probably the most realistic digital replication you can get,” says Banfield. “It’s not just recreating the way they look, but it’s also recreating in a true fashion the way they move. The last output is an avatar. The avatar not only recreates how they look, but it allows their limbs and joints to be digitally moved afterwards. So in terms of the other types of sports where it could be used, it would very much

“We could see that there was an opportunity for taking new technologies to market that hadn’t been done.” JAMES BANFIELD 78 | TVBEUROPE SEPTEMBER 2019