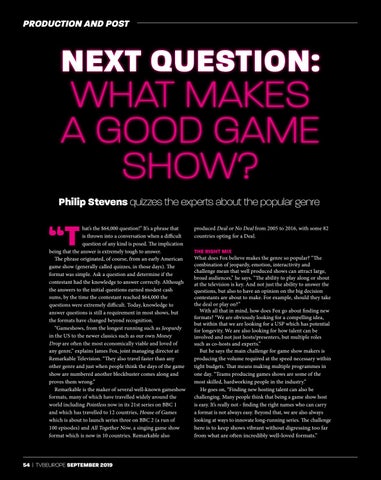 WHAT MAKES A GOOD GAME SHOW?

Philip Stevens quizzes the experts about the popular genre

hat’s the $64,000 question!” It’s a phrase that is thrown into a conversation when a difficult question of any kind is posed. The implication being that the answer is extremely tough to answer. The phrase originated, of course, from an early American game show (generally called quizzes, in those days). The format was simple. Ask a question and determine if the contestant had the knowledge to answer correctly. Although the answers to the initial questions earned modest cash sums, by the time the contestant reached $64,000 the questions were extremely difficult. Today, knowledge to answer questions is still a requirement in most shows, but the formats have changed beyond recognition. “Gameshows, from the longest running such as Jeopardy in the US to the newer classics such as our own Money Drop are often the most economically viable and loved of any genre,” explains James Fox, joint managing director at Remarkable Television. “They also travel faster than any other genre and just when people think the days of the game show are numbered another blockbuster comes along and proves them wrong.” Remarkable is the maker of several well-known gameshow formats, many of which have travelled widely around the world including Pointless now in its 21st series on BBC 1 and which has travelled to 12 countries, House of Games which is about to launch series three on BBC 2 (a run of 100 episodes) and All Together Now, a singing game show format which is now in 10 countries. Remarkable also

produced Deal or No Deal from 2005 to 2016, with some 82 countries opting for a Deal. THE RIGHT MIX What does Fox believe makes the genre so popular? “The combination of jeopardy, emotion, interactivity and challenge mean that well produced shows can attract large, broad audiences,” he says. “The ability to play along or shout at the television is key. And not just the ability to answer the questions, but also to have an opinion on the big decision contestants are about to make. For example, should they take the deal or play on?” With all that in mind, how does Fox go about finding new formats? “We are obviously looking for a compelling idea, but within that we are looking for a USP which has potential for longevity. We are also looking for how talent can be involved and not just hosts/presenters, but multiple roles such as co-hosts and experts.” But he says the main challenge for game show makers is producing the volume required at the speed necessary within tight budgets. That means making multiple programmes in one day. “Teams producing games shows are some of the most skilled, hardworking people in the industry.” He goes on, “Finding new hosting talent can also be challenging. Many people think that being a game show host is easy. It’s really not - finding the right names who can carry a format is not always easy. Beyond that, we are also always looking at ways to innovate long-running series. The challenge here is to keep shows vibrant without digressing too far from what are often incredibly well-loved formats.”