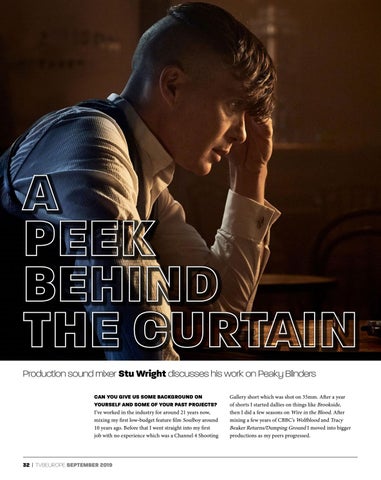 Production sound mixer Stu Wright discusses his work on Peaky Blinders CAN YOU GIVE US SOME BACKGROUND ON YOURSELF AND SOME OF YOUR PAST PROJECTS? I’ve worked in the industry for around 21 years now, mixing my first low-budget feature film Soulboy around 10 years ago. Before that I went straight into my first job with no experience which was a Channel 4 Shooting

Gallery short which was shot on 35mm. After a year of shorts I started dallies on things like Brookside, then I did a few seasons on Wire in the Blood. After mixing a few years of CBBC’s Wolfblood and Tracy Beaker Returns/Dumping Ground I moved into bigger productions as my peers progressed.