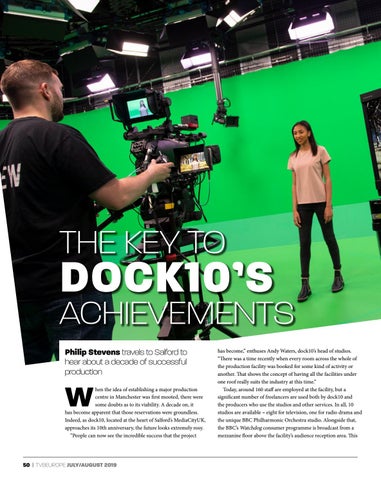 hen the idea of establishing a major production centre in Manchester was first mooted, there were some doubts as to its viability. A decade on, it has become apparent that those reservations were groundless. Indeed, as dock10, located at the heart of Salford’s MediaCityUK, approaches its 10th anniversary, the future looks extremely rosy. “People can now see the incredible success that the project

has become,” enthuses Andy Waters, dock10’s head of studios. “There was a time recently when every room across the whole of the production facility was booked for some kind of activity or another. That shows the concept of having all the facilities under one roof really suits the industry at this time.” Today, around 160 staff are employed at the facility, but a significant number of freelancers are used both by dock10 and the producers who use the studios and other services. In all, 10 studios are available – eight for television, one for radio drama and the unique BBC Philharmonic Orchestra studio. Alongside that, the BBC’s Watchdog consumer programme is broadcast from a mezzanine floor above the facility’s audience reception area. This