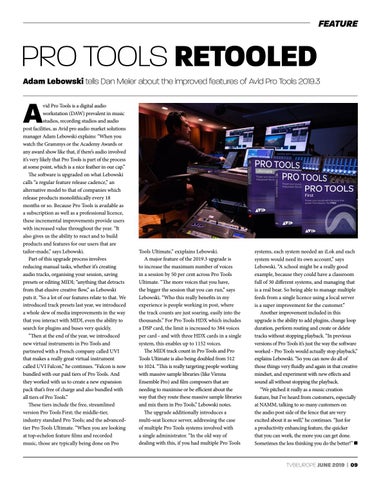 vid Pro Tools is a digital audio workstation (DAW) prevalent in music studios, recording studios and audio post facilities, as Avid pro audio market solutions manager Adam Lebowski explains: “When you watch the Grammys or the Academy Awards or any award show like that, if there’s audio involved it’s very likely that Pro Tools is part of the process at some point, which is a nice feather in our cap.” The software is upgraded on what Lebowski calls “a regular feature release cadence,” an alternative model to that of companies which release products monolithically every 18 months or so. Because Pro Tools is available as a subscription as well as a professional licence, these incremental improvements provide users with increased value throughout the year. “It also gives us the ability to react and to build products and features for our users that are tailor-made,” says Lebowski. Part of this upgrade process involves reducing manual tasks, whether it’s creating audio tracks, organising your session, saving presets or editing MIDI; “anything that detracts from that elusive creative flow,” as Lebowski puts it. “So a lot of our features relate to that. We introduced track presets last year, we introduced a whole slew of media improvements in the way that you interact with MIDI, even the ability to search for plugins and buses very quickly. “Then at the end of the year, we introduced new virtual instruments in Pro Tools and partnered with a French company called UVI that makes a really great virtual instrument called UVI Falcon,” he continues. “Falcon is now bundled with our paid tiers of Pro Tools. And they worked with us to create a new expansion pack that’s free of charge and also bundled with all tiers of Pro Tools.” These tiers include the free, streamlined version Pro Tools First; the middle-tier, industry standard Pro Tools; and the advancedtier Pro Tools Ultimate. “When you are looking at top-echelon feature films and recorded music, those are typically being done on Pro

Tools Ultimate,” exxplains Lebowski. A major feature of the 2019.3 upgrade is to increase the maximum number of voices in a session by 50 per cent across Pro Tools Ultimate. “The more voices that you have, the bigger the session that you can run,” says Lebowski. “Who this really benefits in my experience is people working in post, where the track counts are just soaring, easily into the thousands.” For Pro Tools HDX which includes a DSP card, the limit is increased to 384 voices per card - and with three HDX cards in a single system, this enables up to 1152 voices. The MIDI track count in Pro Tools and Pro Tools Ultimate is also being doubled from 512 to 1024. “This is really targeting people working with massive sample libraries (like Vienna Ensemble Pro) and film composers that are needing to maximise or be efficient about the way that they route these massive sample libraries and mix them in Pro Tools,” Lebowski notes. The upgrade additionally introduces a multi-seat licence server, addressing the case of multiple Pro Tools systems involved with a single administrator. “In the old way of dealing with this, if you had multiple Pro Tools

systems, each system needed an iLok and each system would need its own account,” says Lebowski. “A school might be a really good example, because they could have a classroom full of 30 different systems, and managing that is a real bear. So being able to manage multiple feeds from a single licence using a local server is a super improvement for the customer.” Another improvement included in this upgrade is the ability to add plugins, change loop duration, perform routing and create or delete tracks without stopping playback. “In previous versions of Pro Tools it’s just the way the software worked - Pro Tools would actually stop playback,” explains Lebowski. “So you can now do all of those things very fluidly and again in that creative mindset, and experiment with new effects and sound all without stopping the playback. “We pitched it really as a music creation feature, but I’ve heard from customers, especially at NAMM, talking to so many customers on the audio post side of the fence that are very excited about it as well,” he continues. “Just for a productivity enhancing feature, the quicker that you can work, the more you can get done. Sometimes the less thinking you do the better!” n