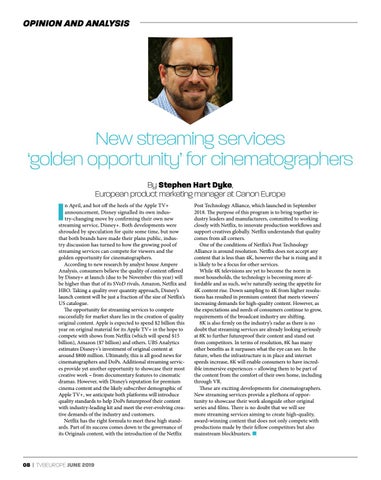 n April, and hot off the heels of the Apple TV+ announcement, Disney signalled its own industry-changing move by confirming their own new streaming service, Disney+. Both developments were shrouded by speculation for quite some time, but now that both brands have made their plans public, industry discussion has turned to how the growing pool of streaming services can compete for viewers and the golden opportunity for cinematographers. According to new research by analyst house Ampere Analysis, consumers believe the quality of content offered by Disney+ at launch (due to be November this year) will be higher than that of its SVoD rivals, Amazon, Netflix and HBO. Taking a quality over quantity approach, Disney’s launch content will be just a fraction of the size of Netflix’s US catalogue. The opportunity for streaming services to compete successfully for market share lies in the creation of quality original content. Apple is expected to spend $2 billion this year on original material for its Apple TV+ in the hope to compete with shows from Netflix (which will spend $15 billion), Amazon ($7 billion) and others. UBS Analytics estimates Disney+’s investment of original content at around $800 million. Ultimately, this is all good news for cinematographers and DoPs. Additional streaming services provide yet another opportunity to showcase their most creative work – from documentary features to cinematic dramas. However, with Disney’s reputation for premium cinema content and the likely subscriber demographic of Apple TV+, we anticipate both platforms will introduce quality standards to help DoPs futureproof their content with industry-leading kit and meet the ever-evolving creative demands of the industry and customers. Netflix has the right formula to meet these high standards. Part of its success comes down to the governance of its Originals content, with the introduction of the Netflix

Post Technology Alliance, which launched in September 2018. The purpose of this program is to bring together industry leaders and manufacturers, committed to working closely with Netflix, to innovate production workflows and support creatives globally. Netflix understands that quality comes from all corners. One of the conditions of Netflix’s Post Technology Alliance is around resolution. Netflix does not accept any content that is less than 4K, however the bar is rising and it is likely to be a focus for other services. While 4K televisions are yet to become the norm in most households, the technology is becoming more affordable and as such, we’re naturally seeing the appetite for 4K content rise. Down sampling to 4K from higher resolutions has resulted in premium content that meets viewers’ increasing demands for high-quality content. However, as the expectations and needs of consumers continue to grow, requirements of the broadcast industry are shifting. 8K is also firmly on the industry’s radar as there is no doubt that streaming services are already looking seriously at 8K to further futureproof their content and stand out from competitors. In terms of resolution, 8K has many other benefits as it surpasses what the eye can see. In the future, when the infrastructure is in place and internet speeds increase, 8K will enable consumers to have incredible immersive experiences – allowing them to be part of the content from the comfort of their own home, including through VR. These are exciting developments for cinematographers. New streaming services provide a plethora of opportunity to showcase their work alongside other original series and films. There is no doubt that we will see more streaming services aiming to create high-quality, award-winning content that does not only compete with productions made by their fellow competitors but also mainstream blockbusters. ■