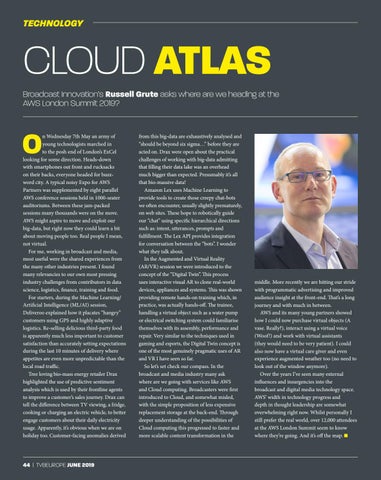 CLOUD ATLAS Broadcast Innovation’s Russell Grute asks where are we heading at the AWS London Summit 2019?

n Wednesday 7th May an army of young technologists marched in to the posh end of London’s ExCel looking for some direction. Heads-down with smartphones out front and rucksacks on their backs, everyone headed for buzzword city. A typical noisy Expo for AWS Partners was supplemented by eight parallel AWS conference sessions held in 1000-seater auditoriums. Between these jam-packed sessions many thousands were on the move. AWS might aspire to move and exploit our big-data, but right now they could learn a bit about moving people too. Real people I mean, not virtual. For me, working in broadcast and media, most useful were the shared experiences from the many other industries present. I found many relevancies to our own most pressing industry challenges from contributors in data science, logistics, finance, training and food. For starters, during the Machine Learning/ Artificial Intelligence (ML/AI) session, Deliveroo explained how it placates “hangry” customers using GPS and highly adaptive logistics. Re-selling delicious third-party food is apparently much less important to customer satisfaction than accurately setting expectations during the last 10 minutes of delivery where appetites are even more unpredictable than the local road traffic. Tree loving bio-mass energy retailer Drax highlighted the use of predictive sentiment analysis which is used by their frontline agents to improve a customer’s sales journey. Drax can tell the difference between TV viewing, a fridge, cooking or charging an electric vehicle, to better engage customers about their daily electricity usage. Apparently, it’s obvious when we are on holiday too. Customer-facing anomalies derived

from this big-data are exhaustively analysed and “should be beyond six sigma…” before they are acted on. Drax were open about the practical challenges of working with big-data admitting that filling their data lake was an overhead much bigger than expected. Presumably it’s all that bio-massive data! Amazon Lex uses Machine Learning to provide tools to create those creepy chat-bots we often encounter, usually slightly prematurely, on web sites. These hope to robotically guide our “chat” using specific hierarchical directions such as: intent, utterances, prompts and fulfillment. The Lex API provides integration for conversation between the “bots”. I wonder what they talk about. In the Augmented and Virtual Reality (AR/VR) session we were introduced to the concept of the “Digital Twin”. This process uses interactive visual AR to clone real-world devices, appliances and systems. This was shown providing remote hands-on training which, in practice, was actually hands-off. The trainee, handling a virtual object such as a water pump or electrical switching system could familiarise themselves with its assembly, performance and repair. Very similar to the techniques used in gaming and esports, the Digital Twin concept is one of the most genuinely pragmatic uses of AR and VR I have seen so far. So let’s set check our compass. In the broadcast and media industry many ask where are we going with services like AWS and Cloud computing. Broadcasters were first introduced to Cloud, and somewhat misled, with the simple proposition of less expensive replacement storage at the back-end. Through deeper understanding of the possibilities of Cloud computing this progressed to faster and more scalable content transformation in the

middle. More recently we are hitting our stride with programmatic advertising and improved audience insight at the front-end. That’s a long journey and with much in between. AWS and its many young partners showed how I could now purchase virtual objects (A vase. Really?), interact using a virtual voice (Woof!) and work with virtual assistants (they would need to be very patient). I could also now have a virtual care giver and even experience augmented weather too (no need to look out of the window anymore). Over the years I’ve seen many external influences and insurgencies into the broadcast and digital media technology space. AWS’ width in technology progress and depth in thought leadership are somewhat overwhelming right now. Whilst personally I still prefer the real world, over 12,000 attendees at the AWS London Summit seem to know where they’re going. And it’s off the map. n