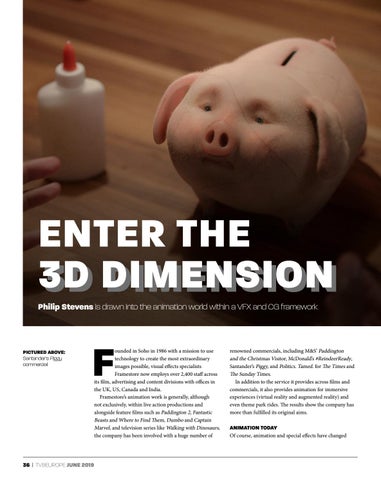 ounded in Soho in 1986 with a mission to use technology to create the most extraordinary images possible, visual effects specialists Framestore now employs over 2,400 staff across its film, advertising and content divisions with offices in the UK, US, Canada and India. Framestore’s animation work is generally, although not exclusively, within live action productions and alongside feature films such as Paddington 2, Fantastic Beasts and Where to Find Them, Dumbo and Captain Marvel, and television series like Walking with Dinosaurs, the company has been involved with a huge number of

renowned commercials, including M&S’ Paddington and the Christmas Visitor, McDonald’s #ReindeerReady, Santander’s Piggy, and Politics. Tamed. for The Times and The Sunday Times. In addition to the service it provides across films and commercials, it also provides animation for immersive experiences (virtual reality and augmented reality) and even theme park rides. The results show the company has more than fulfilled its original aims. ANIMATION TODAY Of course, animation and special effects have changed