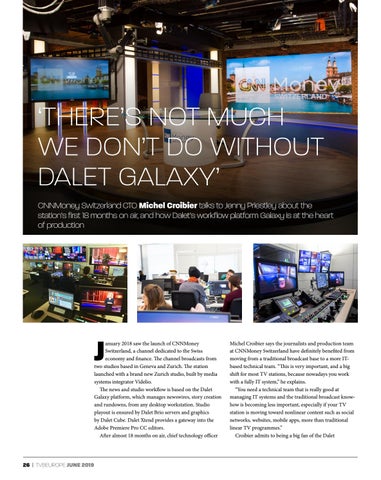 ‘THERE’S NOT MUCH WE DON’T DO WITHOUT DALET GALAXY’ CNNMoney Switzerland CTO Michel Croibier talks to Jenny Priestley about the station’s first 18 months on air, and how Dalet’s workflow platform Galaxy is at the heart of production

anuary 2018 saw the launch of CNNMoney Switzerland, a channel dedicated to the Swiss economy and finance. The channel broadcasts from two studios based in Geneva and Zurich. The station launched with a brand new Zurich studio, built by media systems integrator Videlio. The news and studio workflow is based on the Dalet Galaxy platform, which manages newswires, story creation and rundowns, from any desktop workstation. Studio playout is ensured by Dalet Brio servers and graphics by Dalet Cube. Dalet Xtend provides a gateway into the Adobe Premiere Pro CC editors. After almost 18 months on air, chief technology officer

Michel Croibier says the journalists and production team at CNNMoney Switzerland have definitely benefited from moving from a traditional broadcast base to a more ITbased technical team. “This is very important, and a big shift for most TV stations, because nowadays you work with a fully IT system,” he explains. “You need a technical team that is really good at managing IT systems and the traditional broadcast knowhow is becoming less important, especially if your TV station is moving toward nonlinear content such as social networks, websites, mobile apps, more than traditional linear TV programmes.” Croibier admits to being a big fan of the Dalet